Native North Americans have a long tradition of stories regarding the Mishibizhiw, an underwater panther.  Some tribes, particularly Anishinaabe, Odawa, Ojibwe, and Potawatomi, of the Great Lakes region of Canada consider this being as the most powerful underworld being.  The Ojibwe held them to be the master of all water creatures.  Some myths include this water lynx in their creation legends.


In the Ojibwe language, this creature is called "Mishibizhiw", "Mishipizhiw", "Mishipizheu", "Mishupishu", "Mishepishu", "Michipeshu", or "Mishibijiw", which translates as "Great Lynx," or Gichi-anami'e-bizhiw ("Gitche-anahmi-bezheu"), which translates as "the fabulous night panther."  Often, it is referred to as the "Great underground wildcat" or "Great under-water wildcat."  In Lake Superior Provincial Park on Ontario, there are pictographs of a mishibizhiw and two giant serpents.  These creatures were described as water monsters that live in opposition to the Thunderbirds which are masters of the powers of the air. 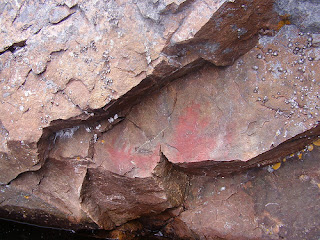 With the body of a cat, usually like a lynx and the horns of a deer, it also sports scales on it’s back and sometimes even bird feathers.  They typically are sporting long tails.  Like many other creatures in native lore, it is said to be a shape shifter.  It is said they roar or hiss like the sound of rushing water. Mishipizheu were said to live in the deepest lakes and rivers and can cause storms.  Other traditions claim they can sometimes be helpful and protective, but generally they are viewed as bringing death or other misfortune.  Traditionally, offerings are made to help with safe passage across the water.

"While skirting some rocks, which by their height and length inspire awe, we saw upon one of them two painted monsters which at first made us afraid, and upon which the boldest savages dare not long rest their eyes. They are as large as a calf: they have horns on their heads like those of a deer, a horrible look, red eyes, a beard like a tiger's, a face somewhat like a man's, a body covered with scales, and so long a tail that it winds all around the body, passing above the head and going back between the legs, ending in a fish's tail."
—French missionary Jacques Marquette, 1637 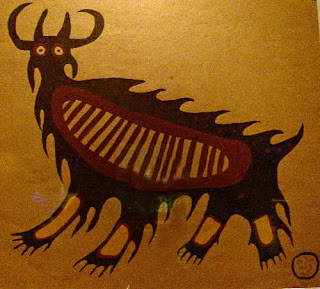 It was a widely held belief that copper came from the creature and charms were made to bring luck to hunters.  After the hunt, these charms would be destroyed.  Native Canadian preferred guns with brass plates depicting European dragons; they likely were interpreted to be images of Mishepishu. An Anishnaabe Ojibwa club from around 1800 has a Mishepishu figure on the end closest to the blade. In 2011, one of the Canadian Mint Mythical Creatures coins depicted a Mishepishu.  The Canadian Museum of Civilization includes an underwater panther in its coat of arms.  While often depicted in both ancient and modern art, modern sightings are virtually nonexistant. 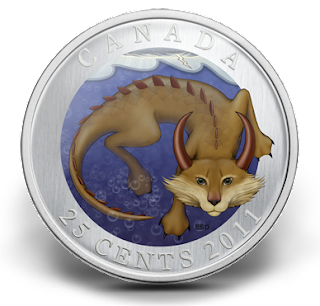