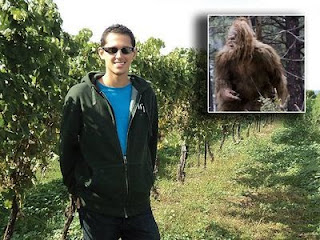 Last week the Toronto Star (6/20/2013) carried a story about a researcher who was arrested while hunting Sasquatch.  He claims he was “bullied” by an officer of the law.

Let’s look at this.

Last August, Tim Marczenko,  a member of Ontario Wildlife Field Research,  was in the woods near Brock Township, Durham Region, Ontario.  He claims, according to the story, that he is researching suspected Bigfoot tracks in the area.  Additionally, Mr. Marczenko is a media person.  His LinkedIn profile says he is an Executive Assistant at Rhombus Media, Inc. in Toronto.

Constable Aukema dismissed Marczhenko’s story as “bulls--t” and demanded to know if he had an accomplice with him. He then seized a survival knife found in the rental car.  The officer told Mr. Marczenko he’d heard the same Bigfoot story from people arrested for drug crimes in the area.

“He threatened me many times, saying he was going to tow my car or charge me with trespassing or concealing a weapon,” Mr. Marczenko said. He said that when the officer found the knife in the rental car, “He said I was lucky I didn’t get a gun in my face.”

I wouldn’t call those threats.  Seems like pretty standard stuff to me.

The Durham police reviewed the complaint that Marczenko was treated poorly.  They admitted Mr. Marczenko’s survival knife was seized in error, but found no misconduct on the part of the officer. Mr. Marczenko has appealed that finding to a police oversight agency.  All this because they thought he was a nut?

“I was shocked and insulted by the way they handled my complaint,” he said. “My rights were violated.
“I feel an apology needs to come from the officer and the department for not taking this seriously.”
Ontario Wildlife Field Research has a reported membership of 106.  Two of these are featured on the website, as are some internet radio shows and a YouTube channel.  Mr. Marczenko is not easily found on the site.  In fact, I never did locate a reference to him.

This presents a problem, for if the police had simply checked the website and there had been a list of recognized researchers, his story would have held up. Legitimate researchers leave a paper/internet trail.  If they don’t, then they should be working under someone who does.

A second problem here is that the “suspicious person” was reported to police by the neighbors.  If he had permission to be on this land, the locals would know it or he would have some sort of written permission to be there.  Otherwise it is called Trespassing, and that is a criminal offense.  Even if the forest was “Crown Lands” or “National Forest”, you have to be there only with permission.  Mr Marczenko was indeed charged with trespassing.

The article states that a “survival knife” was removed by police.  Now, as a field researcher, I can tell you that this is a key piece of equipment to have in the field.  Even a good hiker should carry one.  Why the nice officers confiscated that I do not know nor can I support unless he in some way threatened them.  The article states that vegetation was found in his car…the officers said it looked like marijuana.  Hrmmm.  Why was there vegetation in the car at all?  And was it clearly tagged as evidence for research?  Not likely.  If it were, the officers would have been (or should have been) more respectful.

Mr Marczenko says he was “bullied” by officers.  That the officer called him a liar and accused him of doing something criminal, namely being a marijuana grower.  He was ridiculed for saying he was a Bigfoot Investigator.  Who among us has not been through THAT particular conversation?  Marcello Truzzi (September 6, 1935 – February 2, 2003) was a professor of sociology at New College of Florida and later at Eastern Michigan University.  He was one of the founders of CISCOP (Committee for the Scientific Investigation of Claims of the Paranormal).  He is credited with the quote “Extraordinary claims require extraordinary proof."  Certainly, wandering alone in the forest and claiming to be a Bigfoot Hunter is an extraordinary claim.  It would have served him, and the rest of us, to have shown understanding of the ridicule and provided SOME kind of proof that this was the purpose.

Added further to the problem is that of him having a rental car.  Now, having a rental car isn’t a crime.  It’s not even unreasonable to expect in an out of town investigation of some distance.  This location, however, is not a far distance from his home.  While not damning evidence of wrongdoing, I can see how the police might have found it curious.

Mr Marczenko was doing what is typically called an “onsite investigation”.  He was also doing it badly.  First and foremost, he failed to get permission to be on the property.  Second, he went alone. Third, he went to a location openly known to be the location of illegal enterprise.  Had he bothered to interview any of the locals, as a good researcher would, then he would have known the reputation.  Further, he did so with no researcher identification, no clearly marked evidence collection, a knife he didn’t bother to tell the officer about before they searched, and a rental car

Mr. Marczenko was eventually released, and warned to stay away from the area.  He was charged with trespassing and fined.  He paid the fine.  Now he says,
“I want the (trespassing) charge dropped,” he said. “I also want to be reimbursed for the trespassing fine.”
“I felt helpless, alone, attacked,” Mr. Marczenko said.

“The involved officer’s conduct . . . did not amount to discreditable conduct and I therefore find the complainant’s allegations with respect to these issues as unsubstantiated,” Inspector George Dmytruk wrote in a final report.  “Constable Aukema did detain Mr. Marczenko, however, the detention was required to conduct a complete and thorough criminal investigation,” the report says.

The officer said he was suspicious of the “exceptionally flustered” Mr. Marczenko and that he noticed vegetation resembling marijuana leaves in the rental car (there’s no evidence any pot was found in the car).
“I had a reasonable suspicion that Marczenko was in the area for a nefarious purpose, more specifically the purpose of tending to an outdoor marijuana grow,” Const. Aukema said.

The officer did not specifically address Mr. Marczenko’s claim that he could have had a “gun in his face,” but said he told him “trying to conceal a knife from a police officer who is actively approaching his vehicle was a horrible decision.”

Mr. Marczenko, suck it up.  The rest of us?  Let this serve as a reminder of what could happen if we skip the important stuff—like permission and proper identification.