Despite some criticism, environmentalists are finally starting to take Sasquatch into consideration.  Recently in the Prince George, British Columbia area, concerns have been heard relative to the environmental impact of the proposed New Prosperity gold and copper mine.  The study is a proposal by Taseko Mines to construct an open-pit facility about 125 km south of Williams Lake.

Taseko has a lovely video outlining the plan to preserve the surroundings, specifically Fish Lake.
In it's August 27, 2013 closing statement to the Canadian EPA, Taseko addresses specific concerns about many elements of the local are.  Protection of Grizzly Bears, salmon, and Aboriginal Rights receive specific response in this statement.  Sadly, the response given the Aboriginals is at best disrespectful.  Read the document with a great deal of patience.  It should be noted that while the newspaper report touts a discussion of Sasquatch, this document does not.  Is this because the mine company disbelieves in the possibility of Bigfoot? 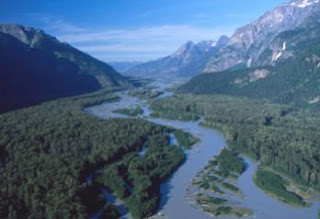 Member of First Nations communities brought the topic of Sasquatch to the discussion several times. When Former Esdilagh chief Thomas Billyboy said  he noticed noticed not only grizzly bears leaving the Cariboo but that  sasquatches have been leaving, too.  Angelina Stump told the panel that her people's oral history includes a time when animals, including sasquatches,  spoke directly with people.  Other references were also made, but the general rebuttal was that these claims were either ridiculous or proposed for political purposes.

The logic is simple. With no proof that the Sasquatch doesn't exist, it is therefore possible that it might exist and we just haven't proved its existence yet. The faulty logic is easily exposed with another example - we also haven't found one-eyed, one-horned, flying purple people eaters, either.

One thing most reports and articles don't mention is that there is precedence.  In the US, the state of Washington, Sasquatch is protected. The US Fish and Wildlife Service lists Bigfoot as an endangered species.  Most North American agencies have prohibitions against killing species that are as yet undefined.  Specifically, in Lake Champlain, Champy is now protected by law on both sides of the lake.  In the early 1980s Port Henry, NY, the State of Vermont, and the New York State Assembly and Senate passed resolutions protecting the "mythological" beast. 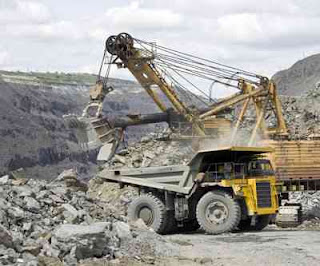 Nothing to See Here

It has been an extraordinarily slow crypto-news year here in Canada.  We've had a couple of nibbles, but aside from the guy investigating Bigfoot in an Ontario pot field and a strange noise out of BC, it's a matter of All's Quiet on the Northern Front.

Some year's are like this.  The local fauna just doesn't come out to play with the Cryptozoologists.  Bessie keeps to her depths and Sasquatch is building a bunker to hide from the recently crowd-sourced drone project.  FoxNews called the latest Canadian bigfoot video too inconclusive--and they are the masters of making mountains out of molehills.

So instead of the molehills of Canadian Cryptozoology, I offer you today an unusual Canadian Mole. 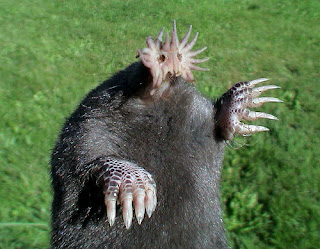 Yes, that is an actual photo of an actual animal.  Meet our Star-nosed mole.  This ugly darling is about the size of a hamster and can be found in the wetlands of the east coast to western Ontario (and sometimes eastern Manitoba). That scary snout actually has twenty-two finger like appendages that are more flexible and more sensitive than any other animal on earth.  Like other moles, it burrows (yes, even through snow).  It is also quite an accomplished swimmer.  Both talents come in handy when hiding from hawks and owls. 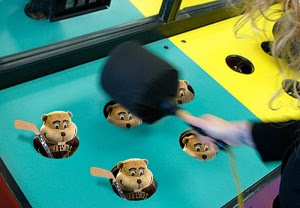 These moles eat mostly worms, but enjoy other delicacies as well.  Leeches and other aquatic insects make up about 30% of its diet, with the occasion land based insect, mollusk or small fish making up the rest.  In that way, they contribute to the health of soil as grubs can become a problem if not kept in check.  Fortunately this guy is not usually found in places where humans are so there really isn't a need to control their population.  This is a good thing too, as they are resistant to just about everything but trapping. 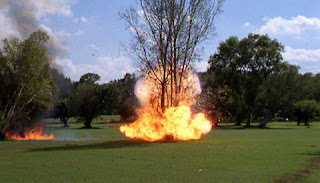 Cultural habits of these gregarious creatures are difficult to study. Pairs have been found together, suggesting monogamy, but large colonies are also quite common, even nearby to found pairs.  Sometimes groups as large as thirty are found. They don't make many vocal sounds, but they do have large ear openings so perhaps they have a level of communication science has yet to uncover.  During mating season, the emit a odor described as "exceedingly rank and nauseous."

I think I would rather meet a Sasquatch.

First, this is not Canadian.  But it is from Olympia, Washington, which is about 110 miles from the British Columbia border.  Second, it's not by any stretch a reasonable representation of the big hair biped we all know and love.  But it is cute, and it's for a decent cause.

The videos below are to promote Washington State's Department of Natural Resources "Discover Pass".  This special permit is needed by everyone who wants to visit the state parks; and by everyone, we mean EVERYone.

Have a look, and a smile.