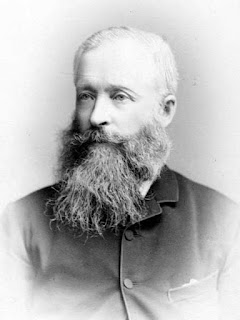 In 1864, Inuit hunters shot and killed an enormous yellow-furred bear in Canada’s Northwest Territories.  They gave the skin and skull to naturalist Robert MacFarlane, who then shipped them to the Smithsonian Institution.

Robert MacFarlane was the same person as Roderick Ross McFarlane of the Hudson’s Bay Company.  McFarlane is historically noted to be a mercantile operative for the company and an arctic naturalist.  He established Fort Anderson for HBC in 1861 to facilitate trade with the Inuit.  Five years later the Fort closed due to declining revenues, probably caused by a measles epidemic that killed many in the area.  Fort Anderson, on the Anderson River, was located about halfway between Great Bear Lake and the Beaufort Bay area of the Arctic Ocean.  The bear was shot at Sachs Harbor and Fort Anderson was the closest trading post at the time.  The Smithsonian recently retooled the MacFarlane donations into a collection of over 5000 items designated in a special study of Inuit history.

At the Smithsonian, the items were stored away and forgotten until the early 1900’s.  At the time of the acquisition of the bear, the Smithsonian was only 20 years old.  Interestingly, shortly after the bear arrived at the museum, they suffered a devastating fire.  Because the bear was deep in storage and not on display, it was spared any damage.

In 1918, Dr. Clinton Hart Merriam researched the remains.  He proposed they were from a new species and not a brown bear at all. He named it Vetularctos inopinatus, calling it the "ancient unexpected bear."  Dr. Merriam was the first chief of the Division of Economic Ornithology and Mammalogy of the United States Department of Agriculture, which evolved into the National Wildlife Research Center and the United States Fish and Wildlife Service.  He was also one of the original founders of the  National Geographic Society.  Through the course of his research, he proposed many different species of brown bears. 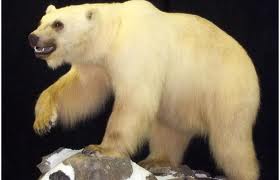 It was not originally believed that brown bears and polar bears interbred and formed hybrid, but this has since been confirmed.  MacFarlane’s bear has pale tan fur and an oddly shaped skull which is consistent with known brown/polar hybrids.  To date, no DNA testing has been done on this specimen to confirm that it was indeed this pairing rather than a new species.  If it turns out to be a hybrid the scientific names Vetularctos and Ursus inopinatus would become invalid under the ICZN.

Dr. Blaine W. Schubert (of East Tennessee State University) was allowed to examine the skull (although the Institute did not allow the examination to be filmed). Schubert stated that he was "100% sure" that it was the skull of a young, female brown bear and "actually, not a particularly large individual."  It should be noted, however, that Dr. Schubert is primarily a Paleontologist with specialties in Cave Paleontology and evolution of short faced bears.  While his knowledge is extensive and his opinion valuable, he is not an expert in Arctic bears nor their prehistoric forefathers.

In 1984, E. Raymond Hall synonymized U. inopinatus with U. arctos horribilis, the normal grizzly bear.  Dr. Hall was influential in vertebrate zoology until his death in 1986.