The RCMP and Sasquatch

The Royal Canadian Mounted Police (RCMP) is the Canadian national public safety service for all of Canada. It provides national,federal, provincial and municipal policing, including services to 184Aboriginal communities and three international airports. Their duties are varied, and sometimes, rather odd.

In May 1873, the Parliament of Canada established a central police force and one hundred and fifty new recruits headed to Manitoba for training. Since then, the size and scopeof the RCMP has changed and improved and currently their main focus is onserious or organized crime and national security. From time to time, however, these highlytrained officers get a report of a Sasquatch. 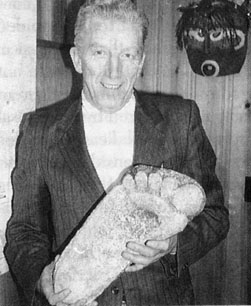 The last weekend of October 1974, a witness in Mackenzie, BCsaw what he first thought was a large black stump leaning against the trunk ofa large pine tree about 500 to 600 feet away. As he approached, the tall black haired creature on two legsmoved to hide behind the tree. Witness fired a shot over the creature's headand it turned and ran very fast straight down a steep hill. The witness then reported the incident to thelocal RCMP. Two years later, theManitoba RCMP received a rash of reports from Poplar River. Officers interviewed witnesses at PoplarRiver Reserve and filed this statement:
"Several people were interviewed and they all statedthat the animal was approximately seven to eight feet tall and was very broadat the shoulders. It had the general body structure of a man only many timeslarger. A foot cast was taken of the foot impression that was left behind bythe so-called monster and is held at this detachment. It measures 16 inches by5 inches, and has only 3 toes. It's fur is a glossy gray color and it has whitehair on it's head. They stated that it was very powerfully built and one manreported that he saw it swimming. To date there have been no further reports ofsightings in our area. It should be noted that this so-called monster seemedvery inquisitive towards the people and would come around the houses on thesettlement and look in doors and windows." ...1976 Norway House RCMPReport (Rocky Mountain Mounted Police)
Christmas 2008 brought reports of the hairy beast from CacheCreek, BC. The report was made bysomeone who claimed their father was following behind a pickup that hit thecreature. Both drivers got out, and there was this big hairy thing laying inthe road. The report goes on to say themen loaded the creature, still alive, into the back of the pickup truck, andthey were taking it to the RCMP in Cache Creek. Ashcroft RCMP Sgt. Dave Prentice says he has seen plenty of Sasquatchesin area “although none of them have been real.” Rumours circulated that the creaturewas being kept on ice somewhere in the dark recesses of the RCMP Detachment.Prentice says the only cooler they have is the little fridge in the lunchroomand while they do keep blood samples in there from time to time, there havebeen no Sasquatches. Mounties nearPinawa, Manitoba did catch a Sasquatch in 2007, but the creature turned out tobe an 18-year-old Winnipeg man wearing a hairy gorilla mask. No charges were laid.
According to John Kirk, no other police force has had todeal with more cryptids than the RCMP. In 1977, a Greyhound bus driven by Pat Lindquist, a reserve officer withthe Vancouver Police Department, stopped short near Lake Erroch B.C. when whatappeared to be a sasquatch crossed the road in front of the vehicle. He got outof the bus and chased the alleged Sasquatch. On the side of the road he foundlarge footprints, but lost the creature as it disappeared into the bush. Rene Dahinden was called in to investigatethe sighting and found that the RCMP was conducting an investigation. Dahinden examined the tracks and said thatthey were genuine and that Lindquist must have seen a Sasquatch. Then four young men from the Vancouversuburbs stepped forward and confessed that they had hoaxed the wholeaffair. Again, no charges were laid, butDahinden resolved to never be fooled again.
Cpl. Annie Linteau, Communication Officer for E Division(Vancouver), was contacted about current RCMP protocol and stated:

“I can confirm that an investigative file is generated as aresult of any incident reported to the police. The file is then assigned to a member for investigation. Based on the circumstances of the incidentand if the incident appears to be related to an animal, police will advise theirlocal conservation office for follow-up.”

When asked what the protocol would be if someone were toshoot a suspected Bigfoot, she replied,

“I am really not in a position to comment asto what sanctions someone may receive as a result of a shooting incident. All I can say is that it is theresponsibility of the police to investigate any shootings. All investigative findings would then be sentto the Prosecution Services for their assessment as to whether or not chargesare appropriate.”

“The RCMP in Manitoba do not track reports of Bigfootsightings per say, so I cannot provide a number for the province.

I can tell you thatthe RCMP takes all calls seriously. In any complaint of a wild animal orunknown creature sighting, the safety of the public would be our firstpriority. The investigation would more likely be turned over to ManitobaConservation and Water Stewardship to follow up.” (Cpl. Miles Hiebert, DDivision)

While it still seems that the Mounties always get their man,it may be up to wildlife professionals to get us a Sasquatch. 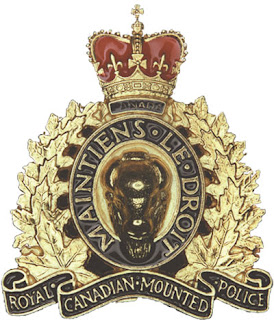