It seems odd to blog from Canada about a case in Wales!  That’s what this is, though—the saga of the Sarich Skill. 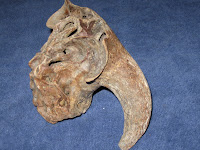 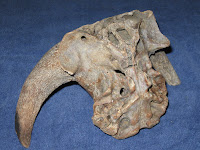 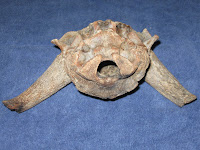 This partial skull was found on a beach in South Wales and sent to me for further study.  The fellow who found it simply was hoping for identification.  We were most grateful to receive this gift, as it gives an opportunity to investigate and to learn basic forensic identification methods. 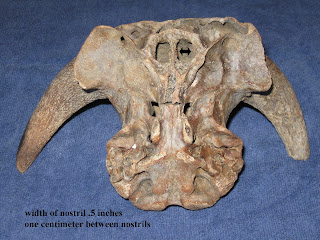 The first thing we looked at was the general shape.  The skull has been photographed and measured from all angles.  At first glance, it appears to be a goat, but as it weighs 0.4kg (400 grams) and horn tip to horn tip is only 12.5 cm, that may not be the case. 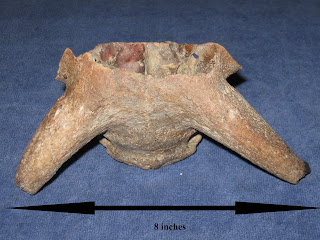 If there was a jawbone and a few teeth, the positive identification would be much easier.  Additionally, since the skull probably spent a great deal of time in the water, its weight is likely affected by sediment and fossilization.  A normal goat skull weighs about 400 grams with organs and flesh intact and without horns.
Is it a goat?  The angle of the horns and the flat space between them counter indicates most breeds of goats. This small size makes us reluctant to label it bovine—a bovine species mature enough to have horns should be much larger.

A sheep perhaps? The eye sockets of a sheep face sideways and the orbital sockets on this specimen do not appear to.  Forward facing eyes are a characteristic of a predator; binocular vision helps focus on the prey.  Sheep horns do tend to be separated by a flat space as is present on this skull.

Specialists from several Canadian Universities have examined the skull and to date it remains unidentified.  Mr. Sarich has donated the skull for further study and for use in educational events regarding cryptozoology.

It might well be a goat or a sheep.  Right now, as an unknown animal, the Sarich Skull is our very own cryptid.