A couple of things got left out last time but going back again allows me to clarify a couple of points.

Back in 2007, Craig Woolheater wrote an article for the Cryptomundo site which touched upon the interrelatedness of some Native North American water-monsters and uncovered fossils which were supposed to have inspired them. The discussion at that point included some quotes from one Adrienne Mayor, author of a book on fossil discoveries and related mythology, and cited a recent find of a fossil fish-tailed crocodile in the state of Oregon.
http://www.cryptomundo.com/bigfoot-report/na-water-monster/ 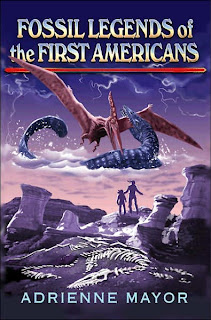 "...Most intriguing, the initial restoration of the fossil croc bears a striking resemblance to a mythic animal of some Native American tribes, the Kiowa, Sioux, Pomo of northern California and others, says Adrienne Mayor, a visiting scholar at Stanford University, author of Fossil Legends of the First Americans. A University of Oregon artist’s depiction of the crocodile greatly resembles the Kiowa artist Silverhorn’s 1891-94 sketch of a water monster with scales, a long narrow head with needle teeth and a forked fish-tail drawn to illustrate water serpent legends, Mayor says. The Pomo Indians described a fish-tailed, needle-toothed water monster called Bagil, as well. [Similar water-monsters are described in several lakes along the California-Nevada border, including the "Serpent" of Walker lake. The long toothy jaws and flinty-hard scales, together with the "snaky" head and body with the forked fish-tail, all remind me irresistably of some sort of a garfish-DD] "...A very similar dragon-creature is described from northeastern California, Parkman adds. The Ajumawi people have a legend of a big serpent-like creature with fish tail and elk antlers, similar to Bagil...

"Antlers or horns are common in Native American depictions of sacred or mysterious creatures," Mayor notes.

Parkman also notes at Serpent Cave, in Baja California, "there are beautiful cave paintings of big serpent-like figures sporting deer antlers and fish tails. In British Columbia, in the Stein River Valley, there are rock paintings of alligator-like creatures sporting fish tails. Rock art depictions of alligator-like creatures also occur elsewhere in the U.S., including Utah, Arizona, and Ohio."[These are Mishipizhiws. The Ohio citation includes an "Alligator" mound which is actually a "Water-Panther" instead.] 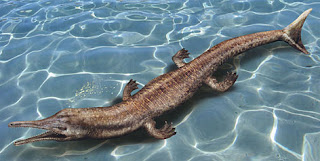 -I would like to go on record as stating that the fossil crocodile bears no resemblance whatsoever to any of the water-monsters under discussion. The water-monsters all have full racks of deer, moose or elk antlers and when they are spoken of as having feet at all, the feet have cloven hooves (for which se the 1909 Omaha water-monster drawing). Furthermore, the fishy monsters are all supposed to be heavily armoured with thich scales while the fossil crocodile is scaleless. And the fossils actually show no obvious indication that the animals were fish-tailed in life: the fin part did not fossilize since it was only composed of soft flesh originally.

Instead all of these Water-Monsters belong to the same category of Eurasian creatures that started out as the horse-headed, multi-humped "Sea Serpents" of Scandinavia since the 1600s-1700s and which were seen somewhat later on off the coast of New England and then eventually off the coast of British Columbia as "Caddies" or "Cadborosaurus." They were also reported regularly in Quebec since the or early 1800s according to George Eberhart, who calls them "Horse's Heads" in this instance. In both British Columbia and in the area around the Great Lakes, they were definitely identified as the traditional Horned (Antlered) Water Serpents, and the descriptions continued across Canada from sea to sea. In Ontario, the term On Niont was on record for this sort of creature sighting in 1647-48.

These sightings I would say were one and all based on imperfect sightings of swimming moose. And although it would seem that only the white men would be foolish enough to be fooled by such a sight, many of the early sightings up to the 1930s were made by Indians. It may be that these were mostly older men, women or children who were not accustomed to seeing moose or elk swimming.

The giveaway is when the heads are seen to bear full racks of horns (antlers). These are shown on some of the  traditional representations including the Kiowa example from the 1890s and on the Navajo pot labelled LB03. Without the horns being apparent we can still recognise swimming mooses becaus of their "Bent" camel-noses, big droopy ears, fully-haired back, and sometimes even the beard or "bell" on the throat (See the "Cadborosaurus" representations in the photos) Moose are indeed sometimes swimming out of sight of land at sea off both British Columbia and Scandinavia. And although the fact might not have been recalled in connection to these traditions, The Kiowa, Apache and Navajo are actually Canadian peoples who migrated Southwards in the period just before the White men came. That is why their Horned Serpents sport full racks of antlers whereas the water-minsters of the Sioux and their neigbours only have simple one-tine horns. The Sioux water-monsters are the ones based on actual fossil creatures, and they astutely gathered that the pterosaurs were flying creatures, Plesiosaurs and Mosasaurs were Sea-Monsters, and that two of the most obvious and characteristic types of dinosaurs were the big Sauropods(which are often found with the relatively small and fragile heads missing) and the big-headed Ceratopsians (of which the sturdy skull is the most likely to be preserved) and so my idea is that they put those two together and made a symbol that said "Dinosaur" (or Unktehila, which was the generic name they used for the same thing) Incidentally, it has been known that the Indians knew about dinosaur fossils since the White Men began hunting for them: they did not try to hide the fact that this was their idea from the start. Therefore this is not a new discovery. Some of the dinosaur books I had as a child mentioned the situation.

For a full explanation of the Water-Horse theory, please see my CFZ blog at the link below: and if you still think the "Train-of-Humps" represent the back of a multi-humped monster, please pay especial attention to the photos at the end of the posting.