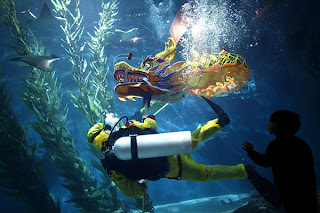 January 23, 2012 begins the Chinese `Year of the Dragon``.  In the Chinese 12 year cycle of zodiac years, the dragon is the only animal that is legendary—all of the other icons are known, and rather benign, animals and birds.  Additionally, this is the year of the Water Dragon. 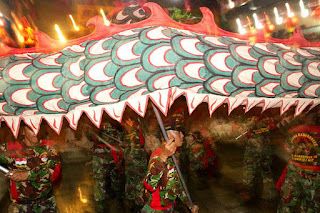 In Chinese mythology and folklore, there are many dragon tales.  About 5,000 years ago, when tribes were fighting one another. The tribe of the Yellow Emperor fought and won wars over other tribes and combined the totems, including the phoenix, the lion, the snake, the scorpion and the tiger, to form the dragon totem. "So that's why when you look at the dragon claws, they are like claws of the lions and tigers mixed. The tail is almost like a scorpion. The body is like a snake being flexible … and the head would be just like the big lion head," says Paul Ng, a feng shui master in Richmond Hill, Ontario. "In other words, they combined totems of many powerful animals into one that flies like the fiery bird, the phoenix. It's quite a mixed basket. It incorporates the most powerful things of all kinds of creatures into one. That's why people love it, because if you're a dragon, you're everything."  This belief is so prevalent that many Asians try to be married or have a child during dragon years

Chinese water dragons began picking up momentum as pets about 1995.  They originate from southern China, Vietnam, Thailand and Cambodia. Over the years there has been an increase in captive breeding by private owners.  If they are well taken care of, green water dragons can live up to 16 years.  Adult males grow to 3 feet; females measure approximately 2 feet. The tail is flattened, banded brown and green, and ends in a point  The tail makes up 75 percent of their length.  Water dragons have well-developed legs and the front legs climb and grasp branches, while the muscular back legs aid in climbing and swimming.  Water dragons also jump and can run very quickly, often just using their hind legs.

In Canada, dragons tend to be of the fruit or boat variety.  Some say that in Keppenfelt Bay, near Barrie, Ontario, there may be a sort of dragon in the water.  Many zoologist and other specialists in aquatics label reported unusual animals in Canadian lakes and streams as `Chinese Water Dragons`.  Doing so, however, is a clear sign that the source is not knowledgeable about such things.  Chinese water dragons (Physignathus cocincinus) only grow to about three feet, and while their name might suggest they are aquatic, most of their time is spent on land.  They are called water dragons because they live near the water, not in it.
Dragons are favorites in mythology.  We’ve tamed and captured them, ridden them across the sky, and saved damsels from their fiery breath.  Early science documented them as follows:

“        There be some dragons which have wings and no feet, some again have both feet and wings, and some neither feet nor wings, but are only distinguished from the common sort of Serpents by the comb growing upon their heads, and the beard under their cheeks. Gyllius, Pierius, and Gervinus . . . do affirm that a Dragon is of a black colour, the belly somewhat green, and very beautiful to behold, having a treble row of teeth in their mouths upon every jaw, and with most bright and clear-seeing eyes, which caused the Poets to say in their writings that these dragons are the watchful keepers of Treasures. They have also two dewlaps growing under their chin, and hanging down like a beard, which are of a red colour: their bodies are set all over with very sharp scales, and over their eyes stand certain flexible eyelids. When they gape wide with their mouth, and thrust forth their tongue, their teeth seem very much to resemble the teeth of wild Swine: And their necks have many times gross thick hair growing upon them, much like unto the bristles of a wild Boar.

Their mouth, (especially of the most tamable Dragons) is but little, not much bigger than a pipe, through which they draw in their breath, for they wound not with their mouth, but with their tails, only beating with them when they are angry. But the Indian, Ethiopian, and Phrygian dragons have very wide mouths, through which they often swallow in whole fowls and beasts. Their tongue is cloven as it were double, and the Investigators of nature do say that they have fifteen teeth of a side. The males have combs on their heads, but the females have none, and they are likewise distinguished by their beards.” - Historie of Foure-Footed Beasts (1658) By: Edward Topsell

It does seem unlikely that these sorts of mythological, flying, fire breathing dragons ever existed.  Biologically, no animal can create fire in its mouth.  Certainly beings of the size in folklore would not be able to fly. An animal the size of a classical dragon would require wings so large that it couldn’t flap them!  Of course the final “nail in the coffin” of dragon lore is that there have never been fossil/skeletal remains found.  It would be easy to stamp the case as closed based on those facts alone.

Historically, however, dragons exist in many cultures.  There are logs and records that turn up in different cultures all over the ancient world, and with the same features and attributes. If such a creature did not ever exist, why do all the pictures, paintings, carvings, embroideries, and descriptions match even though those cultures did not communicate at the time? From thousands of years ago until just a few hundred years ago, they have been cited and described in detail by people from New Zealand to the Inuit of northern Canada.  Marco Polo noted in his records of his trips to China that the royal family kept dragons for ceremonies.

A researcher who was looking into the municipal records of a small village in ancient China, noted how there was casual mention of dragons quite often. He cited one case where an outlying village had been bothered by a bear, and so the leader of the main town took some hunters on a two week excursion to kill it. About a kilometer down the road, they were attacked by a dragon.  They killed it with spear and arrows, but since there were just heading out they decided not to carry the carcass with them. By the time they came that way again, 2 weeks later, the dragon’s body had deteriorated badly so they left it permanently. It became a marker on the road telling travellers how far they were from town. Over the course of the next few months, it quickly dissolved.  Within 2 years, the bones themselves had dissolved as well and no skeleton remained.  Biologists researched and analysed the stories and determined that there are certain metabolic processes that could create acids that would dissolve the tissues like that even after death. These acids would be produced along with certain gases, specifically hydrogen. 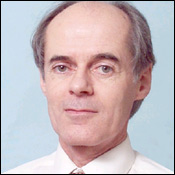 One expert biologist who has speculated on the subject of whether dragons were real is Dr. Peter Hogarth, Senior Biologist of the University of York, in the UK. He is considered the world’s foremost authority on the real-life possibility of dragons. Dr. Hogarth and other biologists determined that an animal could conceivably have 4 stomachs like a cow, but generate gases in them that would create enough buoyancy to help lift the animal into the air, almost like a balloon, as some birds have. This would allow the animal to have shorter, smaller wings since they didn’t have to work as hard to lift the entire weight of the animal. The wings would mostly be used to take off and maneuver which reduces the size necessary to within more reasonable limits.
Hydrogen, when mixed with platinum powder, and oxygen of the air, will ignite into flames at room temperature. Scientists postulate that  when the creature needed to dive to attack, it would have to expel some of its gasses in order to reduce buoyancy. Expelling gasses would have meant igniting into flames from the mouth.  Additionally, some animals are quite resistant to flame (and radiation and other things) so it is conceivable that the dragon, if it “breathed fire” would not burn itself.

“Super-rats” of South America and India became resistant to fire when they burned the sugar cane fields. They also became resistant to poisons, and virtually every method devised to kill them except hitting them with a club. Resistance to heat and flame is evolutionarily possible and even pre-existent in other species. The Pompeii worm, (Alvinella pompejana) discovered in 1980, can tolerate water temperatures of up to 80 degrees centigrade.

The same metabolism that would create hydrogen in internal sacs, which would also create fire when expelled and mixed with air, is also highly caustic.  These natural acids would dissolve the body and skeleton quickly. 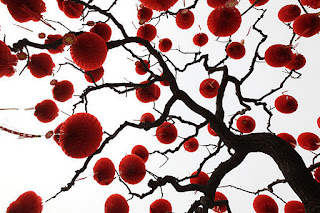 From a Cryptological standpoint, perhaps this “Year of the Dragon” will bring new discoveries.  May the Jade Emperor bless you and  yours and reveal his secrets to all who are searching.  新年快乐