The problem is, that isn’t what he said. Mr. Huls claimed only to have taped/photographed SOMEthing in the water that he felt certain was not a simple wave. One source claims the video has over 200,000 views on YouTube, but I was unable to substantiate that. It was, however, featured on the top rated morning show Good Morning America. MSNBC proclaimed Huls was offering “proof” of Ogopogo. Mr. Huls actually said, however, that he had a recording that showed something living in the water—something large that did not parallel the waves—and that he believes in the existence of the lake monster. Those are very different statements. I applaud Mr Huls for his open mind and careful words; not so much praise for media outlets who sensationalize and take great liberty with quotes. 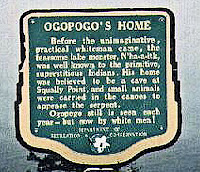 The best film of the probable creature is actually one shot in 1968 by Arthur Folden. The Huls video is problematic for several reasons, not the least of which is its poor quality. As skepdebunker Ben Radford notes, at about the 39 second point, the film seems to show two objects rather than one, floating just below the water. Realistically, this could be just an example of some of the thousands of logs in the Lake. On the other hand, a marathon swimmer claimed that in 2000 two large creatures swam with him in the lake. The lake has been searched and no concrete evidence has surfaced. Witnesses still continue to report the 40+ foot long serpent.