Deep in the waters of Lake Erie there may be a friendly giant commonly called “Bessie”. The first recorded sighting occurred in 1793 and she (or her offspring) continues to make waves in the area.

The 1793 sighting, from near Sandusky, Ohio, came from the captain of the sloop Felicity. This ship was built in Michigan in 1774 and had a crew of six men. She carried two swivel guns and belonged to His Majesty George III. The captain was shooting ducks and sighted what he described as a large snake, more than 16 feet long. Three more sightings came in from ships in 1817, and the water snake was reported to be copper in color and up to 30 feet long. At one point muskets were fired at “Bessie” with no visible effect. The third sighting was by two brothers named Dusseau and occurred near Toledo, Ohio, on the far western shores of Lake Erie. They claimed to have come across a creature between 20 and 30 feet long, writhing on the beach. They described it as looking like a large sturgeon with arms. The brothers fled the area and when they returned the animal was gone, presumably reclaimed by the waves. What was left on the beach they described as scales about the size of silver dollars.

In 1892, the entire crew of a ship witnessed rough water about half a mile ahead while en route from Buffalo, NY to Toledo, OH. When they came up on the waves, they described “viciously sparkling eyes on a creature that was 50 feet long and 4 feet in circumference. Four years later, at Crystal Beach near Fort Erie, Ontario, four witnesses reported watching a creature with a head like a dog for about 45 minutes before it disappeared into the lake near nightfall. Reports continue through the decades, and as early as last summer (2011) reports continue to come in from reliable, sane people. 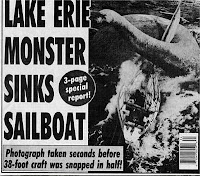 What is Bessie? Certainly she lives in local legend, and many stories may have little basis in fact. Witness testimony, however, cannot be discounted in many reports. In 1969, a gentleman named Jim Schindler came within 6 feet of the creature near South Bass Island. In 1989, something was captured by sonar that was about 35 feet long and cigar shaped, swimming about 30 feet down. She has been reported looking like a snake, a sturgeon, and even a porpoise. Some descriptions say her mouth forms a grin, which would be similar to a bottle-nose whale. A whale in Lake Erie is unlikely though, and porpoises are not fresh water animals. Seals and otters have been documented in nearby Lake Ontario and there is access between the lakes so technically, it is possible for them to be in Lake Erie. Neither animal grows to the size reported; in fact they are nothing like a snake in shape.

There is one report of an injury. In 2001 near Port Dover, a woman was bitten and a six inch set of puncture wounds was documented. It is likely that this is from a bowfin, who are known to protect their nests quite aggressively. Given that Bessie is reported to be huge, certainly the victim would have seen her attacker as she was swimming in quite shallow water. Dr. Harold Hynscht, who treated the wounds from this victim and two others a few days later, said he had no idea what would have made the marks even though he was an experienced diver and was familiar with local aquatics. With the upper and lower bites 6 inches apart, the mouth would have to be quite large.

What is most disturbing, however, is the rapid decline of the health of Lake Erie. Since the 1990s, the lake has become infested with a poisonous algae, causing significant decline in the oxygen in the water. Local fish are dying and invasive mussel species are increasing, and agricultural pollutants are problematic. Lake Erie is home to 50 percent of the fish in the Great Lakes, even though it contains only 2 per cent of the water. What was once a rich feeding ground for Bessie is quickly becoming toxic and barren. Additionally, the water level in Lake Erie is declining, due in part to increased shoreline projects to accommodate commercial ventures in the western basin. Pollutants and declining water levels also increase the overall temperature of the lake, so if Bessie is a cold water creature this could put her in even more peril.

Here’s hoping the lake can sustain her until she can be scientifically studied.