Serpentius Niveus (Snow Snake) has been reported in North America since before European settlers arrived.    It is described as a white snake that loves the cold and has eyes that look like ice.  When aggravated, the eyes are burning red. The size varies considerably, generally from 3 to 6 feet.  It is said to be covered in a shiny fur of white or pale yellow.

For evidence of snow snakes, look near the trails for a round or near-round hole in the deep snow, surrounded by a yellowish border.  You may detect a faint sulphur odor.   This tunnel is reported to be a trail thru the snow as it hunts for food, or the entrance to his under-snow lair.  Few actual sightings of live snow snakes have been reported.

More recently, the snowsnakes are known to be the nemisis of skiers and snowboarders. Snowsnakes tend to like to warm them shelves on steep snow-covered slopes. Their white color makes them impossible to see while skiing or boarding. They are often the cause for unxplained wipe outs.

Canada is home to 25 species of snakes.  None of them are white.  Snakes are unable to regulate their body temperature by generating heat internally.  In the cold Canadian climate, snakes hibernate.  If you are reading this article with an eye toward proving the existence of snow snakes, you are not only gullible, but very misguided.  If a 6 foot long slender white thing slithers through the snow in Canada, it is definitely not a snake.

Potawatomi, Haudenosaune,  Dene, Iroquois, and other native North American tribes have heard of snow snakes though. The Snowsnake game was used as a tool for killing caribou during the times when there were no guns.  Often in the early morning caribou would be found lying on the snow covered lakes and it was during this time that the hunters would slip out onto the lakes and throw a spear-like tool through the snow, into the caribou’s stomach. Native hunters would practice their throwing techniques with the spear, or as it is now called, the Snowsnake.

The snow snake is actually a piece of wood. There are two kinds, a long snake which is 6 feet in length and a short snake which is only 3. Each is hand carved out of hickory or ash. The snakes are only 3/4 of an inch in diameter.

Initially to keep their skills sharp, native hunters would practice throwing their “snakes”.  Over time, this became a game and then a competition event.  Snow Snake is played on a track; snow is piled up at a beginning of the track to a height of about 4 feet, then the track gradually slopes downward.  Sometimes a log is dragged on top of the snow pile to make the track. Contestants throw their snowsnakes like javelins, and the winners are those whose snakes go the furthest. 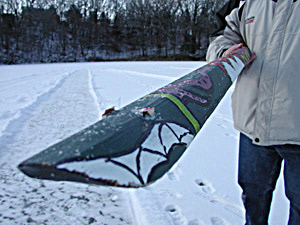 The community who has the best throws, wins.  Often the best individual throwers win prizes.  Perhaps more importantly, the team wins bragging rights until the next event. These were (and in some places still are) huge games. Village played village. People shouted for their team. It was an exciting game of skill, and often a team sport.

Perhaps the reason for so many “sightings” and skier wipeouts is the cocktail known as the “Snowsnake”.  Ingredients are 1 oz coffee liqueur (tia maria,kahlua),  1 oz whisky (whiskey,bourbon), 1 oz tequila,  4 oz half-and-half, and  ice.  It is typically served in a highball glass with no garnish.  Heaven only knows what you will see after a few of those.