Sasquatch from the Bottom Up Part 4: Junk in the Trunk

One of the things that make humans and Bigfoot unique, is the ability to maintain an upright position.  Bipedalism is the ability to be mobile on the back two appendages;   in our case, legs.  What I am researching this week is what makes it possible for us to be bipedal and how we got that way.  This is an important piece of background information when attempting to understand what Sasquatch could be, especially if he is to be considered humanoid. 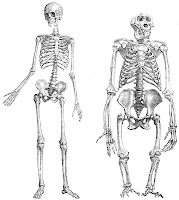 An animal moves in a bipedal manner is known as a biped, which means "two feet" (from the Latin bi for "two" and ped for "foot"). This type of movement includes everything from walking to hopping, so long as it is done on two legs.

There are not a lot of modern animals whose normal walking movement is bipedal.  In mammals, this movement has evolved several times. In the Triassic period some of the ancestors of crocodiles developed bipedalism, including dinosaurs and eventually birds.  Some species use bipedalism for short bits of time.  Some lizards move bipedally when running, usually to escape from threats. Bears and Great Apes often become bipedal to reach food or see over obstacles.  Several animals rear up on hind legs to have sex or while fighting. Humans, however, are most always bipedal when moving, after the first year or two at least.  When moving, bipedal animals typically have upright torsos and often use their tail for balance.

Most mammals are quadropedal.  In the some mammals that are bipedal, namely kangaroos and wallabies, the motion is by hopping rather than one foot at a time (alternating gait). Few bipedal mammals other than primates walk with an alternating gait.  There are many hypotheses on how, when and why bipedalism evolved in humans. Bipedal specializations are found in Australopithecus fossils from 4.2-3.9 million years ago.  Possible reasons for the evolution of human bipedalism include freeing the hands for tool use and carrying, differences in gender in food gathering and child bearing, changes in climate and to a habitat that favored a more elevated eye-position, and to reduce the amount of skin exposed to the tropical sun.
C. Owen Lovejoy theorizes that the evolution of bipedalism was linked to monogamy.  This model is supported by the change in size of the male canine teeth in early hominids suggests that there were reductions in male to male fighting.  Additionally, modern humans show traits like permanent prominence in female breast that argues against the idea that recent humans are the start of monogamous relationships.  According to Richard Dawkins in his book "The Ancestor's Tale", chimps and bonobos are descended from Australopithecus gracile type species while gorillas are descended from Paranthropus. These apes may have once been bipedal, but then lost this ability when they were forced back into an arboreal habitat.  The aquatic ape hypothesis, promoted for several decades by Elaine Morgan, proposed that swimming, diving and aquatic food sources exerted a strong influence on many aspects of human evolution, including bipedalism. 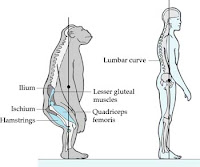 It isn’t just the legs that are crucial to walking upright.  Trunk stabilizing muscles have to be well developed.  Weak lower back muscles will prevent an upright stance, so we must assume that Sasquatch has significant musculature in that region.  Likewise the abdominal muscles must be strong enough to counterbalance the back.  From the perspective remaining upright, the trunk and leg muscles are far more important than upper body strength and development.  It would be safe to assume that Sasquatch is not going to have a very small pelvis and thin legs.  This is something that is remarkable when comparing sightings to those of an ape.  An ape pelvis is significantly smaller (in proportion to the trunk) than that of a human because in an ape it does not need to support an upright stance.  We believe Sasquatch to be mammal and bipedal and therefore probably primate.  The big question, however, is which kind of primate? 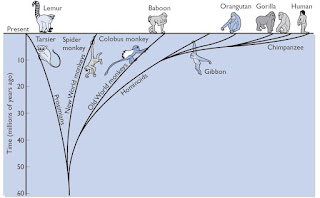 Ninety six percent of DNA base pair sequences of humans and chimpanzees are the same.  Most of the 4% difference is in duplicated non-gene segments.  The genes that differ, mostly control speech, smelling, hearing, digesting proteins, and susceptibility to certain diseases.  The genome for chimpanzees has now been completed as well, showing their evolution and separation from the overall primate soup at roughly 12 to 16 million years ago versus the human version arrival just two or three million years ago.  If we discard the traditional thinking that Bigfoot is either ape or human, or a mix thereof, we then consider the possibility of a separate genome diversion within the period of ten to 14 million years ago.  This would give them their own distinct evolutionary path relative to their environmental needs, perhaps causing the development of bipedal motion with other things like speech or brain size.  It is also possible that their own evolution pattern means they would indeed have innate ability to sense the presence and intention of humans who enter their environment—what we perceive as “ESP”.  Some regions of the human genome more closely resemble the orangutan than the chimpanzee.  At the time humans split off from a common ancestor with chimps, both species had the same ancestral orangutan DNA. Chimps lost some orangutan DNA that humans retained.  This makes the “third species” hypothesis even more intriguing. 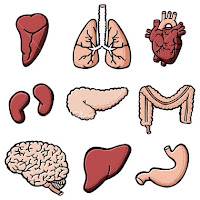 Most internal organs between great apes and humans are pretty similar.  Both have a simple stomach, small intestine, small cecum terminating in an appendix, and a hindgut (the large intestine, rectum, and anal canal). The differences are in the proportions.  In great apes the large intestine is the majority of gut volume where in humans it is the small intestine.  This is likely due to change in available food.  As humans evolved, their foods became more specialized and prepared.  Unless Sasquatch can grow and cook his own food, we should expect him to have a more prominent large intestine.  Bears, on the other hand, have quite a small digestive tract, even compared to other herbivores.

While we have no “proof” of what the Bigfoot diet encompasses, it is generally accepted that he is omnivorous.  Because similar reports of these creatures come from all over the world, it is likely that he is a creature who eats basically whatever is available.  Some researchers report that bigfoot is known to eat fish and small deer, but no good evidence of that has surfaced.  Without genetically proven scat samples it is impossible to suggest any direction on diet.  First we must prove there IS Bigfoot, then we’ll worry about how to feed him.

Sasquatch must have a heart, all animals do.  Likely it is nearly the same as our own, given that non-human primate hearts have been known to function in humans awaiting transplant.  Enzymes and other chemical considerations cause eventual rejection of baboon hearts in humans, but structurally the two species are similar enough to be considered probable as the norm for our Bigfoot as well.
Chemical differences (hormones, enzymes, antibodies, etc) in the lungs of Sasquatch would be nearly the only difference in lung capacity and efficiency if compared to humans.  One factor, the diaphragm, and its purpose and function may be of more importance to investigate.  Since Bigfoot is bipedal, it is likely that the diaphragm is developed differently than that of an ape.  Physiological changes in muscle size and placement is greatly dependent on posture.

Again, without a body or scat samples, much of what we propose to know about Sasquatch cannot be proven (or disproven).  Certainly though, we should be preparing for the day when we DO have those samples so that we know the facts for comparison. 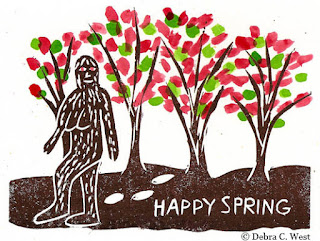