Sasquatch from the Bottom Up part 3: A Sexy Beast

Little is known of the how the bigfoot begets.  Some witnesses claim they have firsthand knowledge of his technique, but nothing has come to light that is reliable evidence.  What is indisputable, however, is that there can’t be just one.

Sasquatch must procreate.  Since we are relatively certain that it will turn out to be mammalian, there likely are both female and male of the species.  Generally, when we speak of “bigfoot” we think in male terms, but it is believed that the subject in the Patterson-Gimlin film was a female.  The creature is described with large, hair covered breasts.  Author Jan Klement speaks to gender in describing a series of encounters in Pennsylvania in 1972.  He claims to have seen, and in fact buried, a creature he believed to be bigfoot.  In his sightings, the creature was decidedly male, having at one point a fully erect penis.  Klement also relates that he witnessed the creature attempting to have sex with a cow. 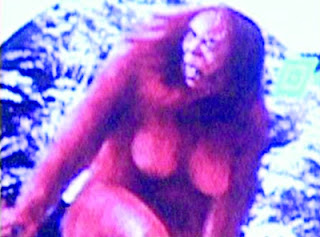 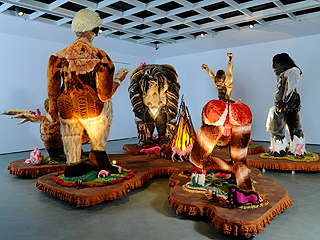 Most reports of sightings include no reference to sexuality or genitalia whatsoever.  Likely our modest society purposely leaves these details out, and researchers are reluctant to push for further information.  Pop culture isn’t so reluctant. Toronto based artist Allyson Mitchell had a touring exhibit of sculpture involving “Ladies Sasquatch” in 2009 (pictured).  McMaster Museum of art Curator Carla Garnet said Mitchell "symbolizes the mythical feminine as something not easily captured or domesticated, or harnessed to sell, yet undeniably powerful and attractive."  Loren Coleman once suggested that female researchers might be more successful than their male counterparts because of pheromones, suggesting that Sasquatch might be threatened by the scent of a man but less so by the scent of a woman. Reports of abduction by Bigfoot is, ironically, much more common in men than in women, however.  Sasquatch has been involved in photo shoots by Playboy, articles in Penthouse, and countless comic books.  There is even a “test” to see how well you would “make out” with a Bigfoot available here.

The Bigfoot Field Researchers Organization (BFRO) has postulated that, based on track charting, Sasquatch infants are born very small and live with the mother until puberty, proposed as beginning around age 10.  They suggest that offspring are spaced about 5 years apart with a mating season generally in May and June. Their article on Bigfoot Physiology lacks published supporting evidence, so for now this has to be viewed as pure conjecture.

Research on the reproductive ability and methodology of Sasquatch is an important part of the overall research of the creature.  Reports of these large, hairy, man-like beasts have been coming for centuries all over the globe.  No species could account for this volume of observation unless the animal is sustainable.  Robert Aumann and Werner G¨uth write that for a species to be sustainable, its habitat must also be sustainable.  Certainly there are plenty of deeply forested areas worldwide that could sustain small groups of this type of animal.  They define sustainable as:


(i) belonging to a species which has not (yet) become extinct,
(ii) that one’s genetic program is well adjusted to the habitat (including the
population composition of one’s own species), in which one lives, and
(iii) that the habitat is used by all its inhabitants in a sustainable way.

To remain sustainable, the creatures must also be able to stand up to any predators, be adaptable to naturally occurring and man-made challenges, and of course, reproduce.  It is suggested that there must be at least 2000 Sasquatch to maintain a healthy population.  This would mean at least 2000 in each area where repeated sightings occur.  It is crucial that along with simply proving the creature exists, researchers also consider how they procreate. 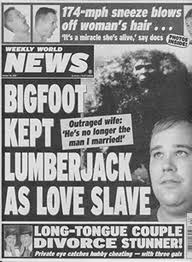