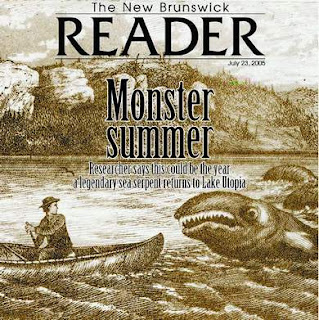 An article that originally ran in 1872 in Canadian Illustrated News provided a diagram of what some witnesses reported seeing.
Stories about its existence by Natives pre-date the arrival of the Europeans but the first documented account appears in 1867. In 1868, many believed the Lake Utopia Monster had been killed! Harper’s Weekly ran an article that a mysterious sea serpent was killed in Passamaquoddy Bay. It was reported to have a dorsal fin and a flat tail like a shark. 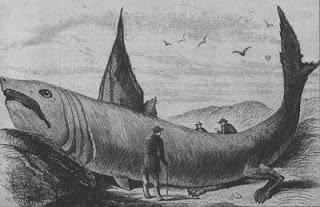 An artists drawing that accompanied the article clearly shows a basking shark and the hind limbs
were likely claspers from what was likely a male basking shark. It was thought to be trying to cross land and make its way into Lake Utopia. Sightings still continued after this incidence.

Norma Stewart has documented the sightings of this animal for over 25 years, and the last reported sighting was in 2000. Stewart believes the animal travels back and forth between Lake Utopia and the Atlantic Ocean, appearing every 3-5 years, as if on some kind of breeding or feeding cycle. Because of this movement between the ocean and freshwater, she refers to it as a sea monster, that may even be amphibious and have lungs. The fact that the animal may be migratory helps debunk the skeptic argument that the lake could not sustain an animal (or animals) the size of the Old Ned.
How does the animal migrate between a freshwater lake and the ocean if it is not amphibious and has lungs? St. George is a small town close to Lake Utopia. The Magaguadavic River (river of eels) is connected to Lake Utopia through a deep canal and the river flows through St. George to Passamaquoddy Bay and the sea beyond. While the Magaguadavic River is dammed in St. George, it is said Lake Utopia is also connected to the ocean via a system of underground tunnels so it is theoretically possible for a sea creature to by-pass the dam in St. George and move into the freshwater system via these tunnels.

There is no conclusive evidence for the existence of this creature. Some speculate it is an otter, beaver, logs, a ball of freshwater eels, a large fish or some other known animal. Eels do live in the lake but nothing of that size has ever been captured. Theories abound about what it might be but, tor the time being, the mystery of the Lake Utopia Monster remains just that, a mystery.