by Robin Bellamy
We watched the purity of ghost research descend into the depths of hell with the deluge of “reality” television like Paranormal State and other “ghost hunter” shows. Now the steady decline of Crytpozoology gets its day. Shows like River Monsters and Destination Truth initially gave us hope that the Crypto world would raise the bar for “reality research” by doing actual field work and seeming not to fake results. The latest entry, “Finding Bigfoot” looked promising as well because it was not only presumably going to contain Canadian Content but also not focussed on handsome hunks with perfect hair. 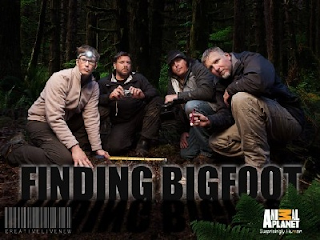 Alas, this was not even of the marginal calibre of Destination Truth. Finding Bigfoot, first and foremost, doesn’t find bigfoot. They break out the FLIR camera, which retails for a whopping $1500 or more, and photograph horses, bunnies and people, but no bigfoot. Smudges in the mud in Georgia are hailed as “the best track find of (his) entire bigfooting career”.
The website notaghost.com remarks, “It's like a perfect storm in which the worst kind of producers meet the most credulous of believers. It's a match made in crackpot heaven.” This is probably the most succinct review of the show. Matt Moneymaker has in fact been quite open about the butchering, disguised as editing, that the TV folks have done to make this show “more interesting”. He has been the saving grace for this genre of television. His candid criticism of what the show presents versus what was actually filmed is being very well received in the Cryptozoology community, but by participating in the show he negates that. A serious cryptozoologist would abandon the project as soon as the hoaxery is discovered, yet there are rumblings that there will be a second season. How can Moneymaker claim he is incensed at the editing and portrayal and still justify returning for more?
Second, the “experts”, although thankfully not into the “paranormal star” mystique, are less than professional. Lets start with the name Bobo. Is that a name that screams “scientific evidence and logical conclusions”? Maybe the last names will be more trustworthy—nope, the lead is named “Moneymaker”. An unfortunate coincidence, as that is truly his name and he really is a “bigfoot hunter” in real life.
I recently appeared as a guest “expert” on a couple of episodes of “Freak Encounters”. They edited a bit of what I said, but left the information mostly as I presented it. That project was clearly fictional—the premise was to fool others into thinking that “real” crypto monsters were coming to get them. They supported the fiction by introducing the actual history and information on each creature. At no time did they seek to provide “evidence”. Still, it was a pretty terrible show, and was not renewed. Is the viewing audience more interested in recreations of sketchy “facts” and dismissing obvious fictional shows? Do viewers want to be lied to? When fiction fails and pseudo-reality succeeds, what does that tell us about our goals for entertainment?

The biggest frustration is that there is good evidence and information available. There are scientific methods and forensic evidence in cryptozoology that are not yet available in other types of paranormal studies. There are actual degreed scientists working on the bigfoot puzzle as opposed to the starts of this show—Moneymaker is apparently a lawyer, Barrackman is a fourth grade teacher and a jazz musician, James Fay (aka Bobo) is a commercial fisherman, and Ranae Holland, the one team member with actual scientific credentials, works for the NOAA and has a specialty in the relationship between fish and bears. Where are Jeff Meldrum (BS in Zoology), Dr Mark Miller (neuropsychology), Dr Robert Pyle (School of Forestry at Yale), Estiban Sarriento (primatologist), John Bindernagel (wildlife biologist) or Roderick Sprague (anthropologist)? These are degreed scientists active in the field of cryptozoology. Aren’t scientists “sexy” enough for television? Where is the excavation of proposed bigfoot burial sites in Ohio discovered by Dallas Gilbert? Where is the DNA from the hair clumps found by Paul Freeman? At least Monsterquest had a real 911 call and an in depth analysis of the Patterson-Gimli film. Where is the research on thousands of sightings of Canadian Bigfoot? Where, in this new series, is bigfoot?
Posted by robin at 07:48

Email ThisBlogThis!Share to TwitterShare to FacebookShare to Pinterest
Labels: Bigfoot