Many need a bit of a primer on the history of fortean zoology/cryptozoology.  We'll start with Rene Dahinden.

Dahinden is important for many reasons, not the least of which was bringing us the Patterson-Gimlin film.  Dahinden was the first to show the film of a Bigfoot and he worked hard to see to it that the film got the scientific attention he felt it deserved.   Showings occurred, in Vancouver, Manhattan, The Bronx, Washington, D.C., and Atlanta, by the end of 1968, then later in Beaverton, Oregon. Dahinden traveled to Europe in 1971 for showings in England, Finland, Sweden, Switzerland and Russia. He hoped to intrigue the scientists to further investigate. 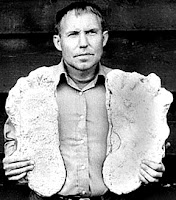 Although he never personally saw Bigfoot, he championed the authenticity of the P-G film. While in Russia, he met with hominologist Dmitri Bayanov.   Bayanov celebrated his 87 birthday in march 2019 and  believes the creatures exist as a rediscovery of Homotroglodytes and Homo Sylvestris.  He was one of the researches who deemed the P-G film authentic.  Bayanov also coined the term "Hominology".    Dahinden's work with Russian scientists provided extremely important developments in bigfoot research.

Dahinden was born in Switzerland in 1930 and moved to Canada in 1953.  Within three years he was actively researching Sasquatch and networking with other researchers.  He traveled throughout the Pacific Northwest and interviewed many witnesses, as well as doing fieldwork and examining evidence collected by others.

Dahinden was friendly and entertaining; his humor helped him connect with witnesses for interviews.  With that spirit, writers William Dear, William E. Martin, and Ezra D Rappaport modeled a rather famous film character after him.  Harry and the Hendersons (1987) had a character played by David Suchet as Jacques Lafleur, the Sasquatch hunter.


We both spent our whole lives chasing after that beast and we both had to stare at ourselves in the mirror every morning and keep repeating, "I am not a fool. I am not a fool."  (Jacques Lafleur, Harry and the Hendersons)

Kokanee Beer even featured him in an ad for their product.

In Loren Coleman's obituary for Rene Dahinden he praised him for his encyclopedic knowledge of the field.  That is no small complement.  Research into hominids can involve many different sciences, and Dahindren was able to pull information simply from memory on occasion.

His only book, Sasquatch/Bigfoot: The Search for North America's Incredible Creature, was co-written with Don Hunter and is still available for purchase. 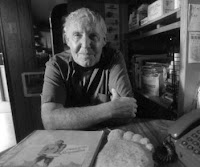 "Something is making those goddamn footprints, and I'm going to find out what it is, " Dahindren once said.