When is a crypto find a dead animal?  Most of the time,actually.  Yet folks continue to over-react and make outrageous claims over every carcass found.

This time, it's the "Ajax Lorax"-- a term coined by Loren Coleman.  An Ajax, Ontario local came across a decomposing carcass and posted these photos: 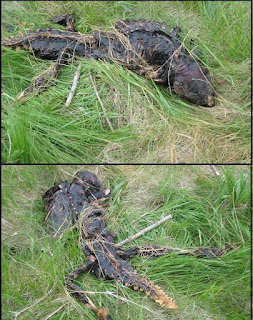 Suddenly it's a discussion on Redditt, with speculations running the gamut from alien to chupacabra.

More likely it is just a dead beaver, raccoon or skunk, actually.  It's not rocket science.  And thorough investigation involves much more than following a chat board conversation and glancing at a photo.

First, this thing was found by a dog in southern Ontario, in a suburbia near a water overflow area.  I think we  can pretty much rule out amphibians and chupacabra base on that fact alone.  Second, it doesn't really look all that strange.  It has a head, legs, and tail.  There is nothing to scale its proper size, although we can assume it is rather small given the size of the blades of grass.  The bones in the tail are consistent with those in a beaver.  All of those are based on just the most casual "investigation" based on the photos.

So why the drama?  First, because it is weird.  People see something unusual and they tell their friends.  these days that happens online, so the discussion is very public.  Second, someone else gets interested and tries to fit it into their hobby--in this case, cryptozoology.  The hobbyist then contacts someone with some authority (or perceived authority) on the subject, hoping for either an opinion or some attention.  A decomposing star is born.

Things have been pretty quiet on the Crypto front in North America.  There aren't a lot of "creatures" that have not by now been identified, and the ones that remain are either easy to believe exist or so fantastic that most can't wrap their heads around them.  We have come a long way toward reasonable thinking (drama notwithstanding).  We have our BigFoot and our lake monsters that everyone knows will eventually get scientific names and be "official".  Mothman and the Jersey Devil and that ilk have so many alien or supernatural overtones that most Cryptozoologists don't do serious research on them, opting instead for a strictly biological/zoological opinion that they simply don't exist.

So when a dead beaver shows up online, some folks get a little excited.  It's hard work, finding substance to fill a crypto blog.


Sometimes the questions are complicated and the answers are simple.