News sources in BC reported late last month (May 2012) that scientists are baffled by a creature shaped like the bat symbol.

This ocean oddity was filmed offshore near Victoria Island and was posted on YouTube.com last September.  The video was done by NEPTUNE Canada , which is the world's first regional-scale underwater ocean observatory, plugged directly into the internet  The region crosses the Juan de Fuca plate and gathers live data from a broad spectrum of instruments.  Data is transmitted via fibre optics to the University of Victoria which provides free internet access to everyone. It's supporters and partners list is quite impressive, and the science very sound.

But what of this creature?

Some have suggested this is a rare shot of mating Giant Pacific Octopuses.  It is possible (this image is red octopuses  mating). The camera angle would have to be unusual and generally,  octopuses  don't travel much as they mate. 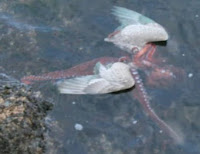 Last March, photographers in Victoria caught a red octopus capturing and dragging down a seagull.  Deep in the water, this could look similar, but there are two problems with this theory.  First, generally  octopuses  don't go as deep as the batman image was shot (over 2000 meters deep).  Second, the likelihood of a captured prey retaining its shape after a submersion that far is unlikely.

With hard work and a bit of luck, this mysterious image will be resolved.  Perhaps a new creature will be identified, or an old one will prove to be the source.  Deep in the sea, there are a lot of possibilities.

In the video below, a section is zoomed and slowed and we can clearly see that it casts a shadow, so it is not some trick of photography.  It has translucent webbing or fins as well. It moves voluntarily, so it is unlikely floating trash or a carcass.  But what is it?  And could it have any connection to the mysterious feet that have washed up over the years?


NEPTUNE also has lots of cool stuff like a live underwater camera feed and sounds recorded in the Pacific.  If no other good comes of this remarkable discovery, it has promoted the NEPTUNE project and website so that we can all be part of the science and learning.  Who knows, maybe a caddy will even swim past the myriad of cameras!