Thank you to Guest Blogger Sue St. Clair for this entry!


No, this is not an article about an "incredibly crass looking individual who prides themselves on dressing metrosexually," as defined by the Urban Dictionary. It's about a mostly forgotten creature who was reported to have been sighted off the shore of Lake Ontario more than century ago.


Thanks to the extraordinary beautiful weather we have had through the month of March, the hubby, and I recently found ourselves strolling along the western beaches of Lake Ontario towards Ontario Place. The now closed for renovations Ontario Place was originally built in 1969 (opened in '71) and served as a waterfront entertainment center for the city of Toronto for the last 40+ years. Prior to its construction the area was mostly underdeveloped, and definitely not an attractive place to for a family to visit.

As we walked along the shoreline and considered how once again it may be in for a dramatic change due to the Ontario government's plans to completely redevelop the area I recalled a crypto sighting I had read about quite a long time ago that had occurred roughly in this very spot.


On August 22, 1882 The Daily Mail ran a story entitled "A Marine Monster" and described an encounter that had been reported the day before of a "sea serpent" in lake Ontario in the vicinity of the Garrison Common, "which some of the Markers saw at the Ranges."

The weather at the time is described as cool, when the workmen who had been "engaged at the targets," state they saw an approx. 50 ft long sea serpent. Here is what they reported:

" Between 8 and 9 o'clock while placing the targets in position on No. 1 range, a boy rushed up saying there was a something floating near the shore. Some of the men were curious enough to leave their work, and hasten down to the shore. There sure enough was a large blue-ish grey mass floating lazily near shore. It had every appearance of being asleep, as its body yielded to every ripple. Part was submerged, but the upper portion of the head floated just above the water.  The part which was visible was covered with short stiff bristles in front, which increased in length towards the sides, and extended for a distance of about 10 feet on each side. The back or at least the portion of it that was seen above the water was lighter coloured than the head."

The sighting, which was witnessed by several people lasted upwards of 3 minutes, when suddenly it raised its head out of the water, swished its tail and rapidly swam due south in the direction of a steamer.  The witnesses went on to describe the creature's head as resembling an "eel with the exception of long trailing hair or whiskers, and small dark eyes."  They also go on to state they heard it give a short sharp bark. 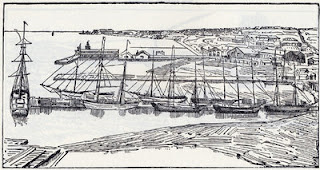 Here is a sketch of the Queen's Wharf in Toronto circa 1896 looking westward toward where Metrosaurus was reportedly seen. Illustration from Robertson's Landmarks of Toronto, vol. 2, Toronto: J. Ross Robertson, 1896.

To make this story even odder in the same year a report was made of another "sea serpent" seen in a creek near Hoggs Hollow. One wonders did Metrosaurus or perhaps one of its kin make its way up the Don River?! Seems very unlikely, but one never knows. There have been reports of a lake creature in Lake Scugog, which is a small man-made lake about an hour and half north east of the City of Toronto. If a creature could feasibly make its way from Lake Ontario to Hoggs Hollow, perhaps the same could be true of Lake Scugog as well? How such a creature could accomplish such a thing without being witnessed doing so I have no idea.


Sue Demeter-St. Clair is a psychical researcher living in Toronto, Ontario Canada. She is a co-founder of Paranormal Studies Investigations and Canada and enjoys reading about and researching stories and reports of fantastical creatures.