There is a fine line between myth and legend.  Traditional dictionary sources draw that line at “supernatural” or “paranormal” but those words themselves are gray areas. 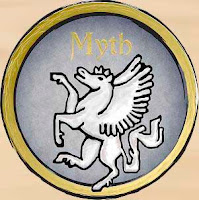 The Free Dictionary (freedictionary.com) defines Myth as “A traditional, typically ancient story dealing with supernatural beings, ancestors, or heroes that serves as a fundamental type in the worldview of a people, as by explaining aspects of the natural world or delineating the psychology, customs, or ideals of society.”  By this definition, most sea and lake “monsters” would be considered myth, as they are generally fundamentally the same and are ancient in origin.  But the same source gives this definition for legend:  An unverified story handed down from earlier times, especially one popularly believed to be historical.  Lake monsters would fit that definition as well.  The one thing both definitions have in common is that the stories (reports) are “unverified”. 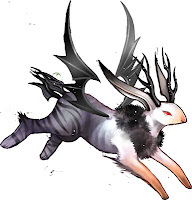 Just what constitutes verification?  Certainly the Sasquatch fits both legend and myth definitions, but since footprints and various other bits of “evidence” are present, does that make them verified?  It would seem that the presence of footprints verifies that something indeed walked in a particular location.  How do we assign the print to Sasquatch?  What is it about that print that points to a legendary or mythological being rather than a verifiable, biological creature?  Which brings up another big question; must an entity be biological to be “real”?

Such is the nature of the study of Cryptozoology.  Many legendary and mythological creatures have been verified to exist biologically.  The Coelacanth, the Komodo Dragon, and the Giant Squid were ancient legends—believed by many to be actually myths—and have now be substantiated by tangible evidence.
George M. Eberhart has written of the difficulties of categorizing “mystery animals”.   He gives us ten types of mystery animals that would be defined as cryptozoological.

1.     Distribution anomalies [known animals reported outside their normal  range, e.g. the anomalous big cats of the U.K.];
2.     Undescribed, unusual, or outsized variations of known species [e.g. the giant anacondas reported from Amazonia or the spotted lions of East Africa];
3.     Survivals of recently extinct species [e.g. Ivory Billed Woodpecker presumed extinct ca. 1960, or the Steller's Sea Cow presumed extinct ca. 1770, both of which are occasionally claimed to have survived to the present];
4.     Survivals of species known only from the fossil record into modern times [e.g. the mokele-mbembe of central Africa, sometimes described as a living dinosaur];
5.     Lingerlings, or survivals of species known from the fossil record much later into historical times than currently thought [e.g. the woolly mammoth, presumed extinct ca. 12,000 BCE but occasionally purported surviving into later eras];
6.     Animals not known from the fossil record but related to known species [e.g. the Andean wolf or the striped manta-ray reported by William Beebe in the 1930s];
7.     Animals not known from the fossil record nor related to any known species [e.g. North America's Bigfoot or most sea serpents];
8.     Mythical animals with a zoological basis [e.g. the Griffin, partly inspired by dinosaur fossils of Central Asia];
9.     Seemingly paranormal or supernatural entities with some animal-like characteristics [e.g. Mothman, Black Dogs or some fairies from folklore];
10.     Known hoaxes or probable misidentifications [e.g. the Jackalope, an antlered rabbit created as a hoax or prank, but possibly inspired by rabbits infected with Shope papilloma virus, which causes antler-like tumors].

Eberhart also gives us a good list of exclusions for classification—or more simply, things that probably are NOT cryptozoological.

1.     Insignificance. "Cryptids must be big, weird, dangerous or significant to humans in some way."
2.     Lack of controversy. "Someone needs to observe a mystery animal and someone else needs to discredit the sighting. Cryptozoologists function as interventionists between witnesses and skeptical scientists."
3.     Erratics. "The out-of-place alligator […] that turns up in an odd spot, undoubtedly through human agency, is not a zoological mystery […] [I]f someone discovers a new species of alligator that lives only in sewers, that is a different matter."
4.     Bizarre humans [e.g. zombies]
5.     Angels or demons […] "the paranormal or supernatural is admitted only if it has an animal shape (a werewolf sighting, which might involve a real dog or wolf, or a mystery canid)."
6.     Aliens "[unless such extraterrestrials] arrived a long time ago and thus classify as residents." 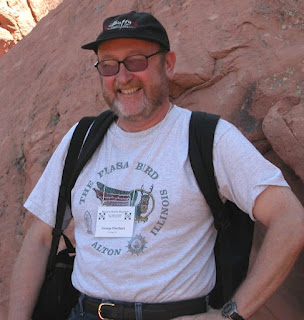 Mr. Eberhart is a bibliographer and librarian for CUFOS (Center for UFO Studies). He completed a degree in journalism at the Ohio State University, then came to the University of Chicago for a Masters in Library Science.. He is employed by the American Library Association headquarters in Chicago as editor for the trade journal American Libraries. He belonged to a natural history book club, and in 1959,  read On the Track of Unknown Animals by Bernard Heuvelmans.  Eberhart’s book “Mysterious Creatures: a Guide to Cryptozoology” can be previewed on Google Books and purchased from Amazon for about $190.00.

To some, it may seem a matter of semantics.  If cryptozoology is to progress out of the label of “fringe science”, however, these definitions and criteria have to be made and widely accepted by serious researchers.  It isn’t enough to go on a “bigfoot hunt” and call oneself a cryptozoologist.