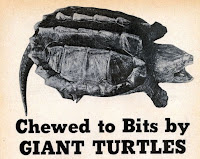 The Canadian province of Newfoundland and Labrador encompasses a total area of 405,212 square kilometres (156,453 square miles) yet has a population of only about half a million people. Its capital city of St. John’s lies on the same latitude as Seattle, Washington and Paris, France, but the temperatures can range from a balmy 20C to a frigid -18C. First inhabited about 9000 years ago, Europeans arrived about 1000AD. These Vikings didn’t stay, however, and it wasn’t until the 15th century that regular inhabitants graced this pristine environment. Until 1949, Newfoundland was a colony of England, so it is one of Canada’s newer provinces. Made up of vast coastline, thick boreal forest, dense barrens, and ancient rock formations, the area is a great place for spotting whales, seabirds, icebergs, and occasionally, something even more fantastic.

Cape Bonavista, Newfoundland is home to a giant turtle, claims Bob Crewe. He came upon this creature while looking at the ocean from a cliff. "I saw its body in the water measuring about 30 feet across, just lying there and moving slightly," said Crewe. Although his sighting took place near a local attraction called the Viking (an ancient rock formation) Crewe is certain what he saw was a giant turtle. Other giant turtles in the area are white ones . These creatures are described as being about 50 feet long. Besides their pure white skin, they have big tusks, four inches in diameter and about three feet long.

Nennok is the Inuit name for what we call the polar bear, and the suffix “luk” indicates it is evil. This would imply that the Nennorluk is an evil polar bear, but alas

, it is “simply” a ferocious amphibious creature reported as far back as 1773. Similar creatures are said to inhabit nearby Greenland. It is said to feast on seals and have ears big enough to cover a tent. It comes from the sea, but is reported to come ashore at will. Reports from August 1786 near the town of Okak claim the thing is as tall as an iceberg. The legend is that it does not swim, but rather walks on the bottom of the ocean. It is white on its back like a polar bear but big enough to turn over large rocks with a thunderous noise. Sir Humphrey Gilbert, on his way back from claiming the New Found Land for Queen Elizabeth and Britain in 1583, is said to have stared into the glaring eyes of a lion-like sea monster. The Canadian government forced the last remaining townspeople from Okak in 1956. Perhaps it is for the best. 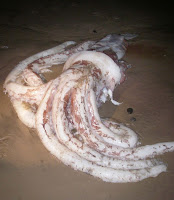 Once thought to be the subject only of myth and legend, real specimens of Architeuthidae (Giant Squid) have been well documented in the Atlantic near Newfoundland. They live in the deep and grow to about 43 feet long, just shy of the size of the Colossal Squid which grows to 46 feet. The tentacles of this monster can grow to 16 feet. In 1877, a near perfect Giant Squid washed ashore alive in Trinity Bay, Newfoundland. Nightmares of the deep can come true.

Crescent Lake, Newfoundland is home to a scary creature known as a giant eel. Underwater workers were repairing a dock when they discovered dozens of the eels, each over eight feet long and bigger around than a man’s thigh. Locals call the eels “Cressie” with a nod toward Loch Ness’s “Nessie”. Eels are generally migratory, but these whoppers stay put, landlocked in the lake. Inability to leave and come back is generally thought to be the reason they can grow so large.

An account of a bigfoot-like cryptid from the 1930s comes from a man who sold bootleg rum. As he was recovering some buried bottles in his back garden, in the dark, he saw a very bright white light coming toward him. It was so bright he could not look at it directly. As it got closer it started to dim until he could make out that the light was coming from the eyes of something over 6 feet tall, covered in black hair about an inch long. The man hurried home and the next day he returned to the spot to again try to dig up his bottle. Again, the beast appeared and the fellow abandoned his quest. Legend is that this experience inspired him to give up bootlegging and go into legitimate business. Was this a Sasquatch or some sort of alien? Or was it a little too much of his own stock?

A more credible account comes from Labrador in the 1947. While visiting New York City in 1930, a Labrador doctor and his wife told of trappers who found barefoot tracks in the snow and nests under trees. The beings are said to be “wily” and able to climb easily over large stumps and other obstacles.

It freaked folks out when it first arrived, but eventually the blob was identified. Many of these organic masses have washed ashore along Newfoundland’s coast and are distinguished from normal beached carcases because they have no visible eyes, no defined head and no bone structure. It wins the moniker “globster” when it is unidentifiable by the general public and a controversy ensues. Generally, these globsters are the remains of sperm whales, large sharks, or giant squid.

Canadians are proud of their beavers, but in Labrador they can get REALLY big. Sightings have come in of the animal by witnesses who claim it weighs up to 700 pounds, nearly ten times the size of a normal beaver even on a good day. The sightings may have some merit though-fossil evidence from the Pleistocene era of beaver thought to be at least that big. Native Canadians in Labrador have named a river “Montagnais-Naskapi” which translates to “Giant Beaver River”.

Too often overlooked as a great place to do cryptozoological field work, Newfoundland and Labrador may just be the best place to study just about any creature you fancy.