The Canadian province of Manitoba is home to many different kinds of cryptids. In fact, the very term “cryptid” was coined by a Manitoban name John Wall in a letter he wrote to the International Cryptozoology Society in 1993. This province is a wonderland for cryptids; there are vast areas of woodland (264,000 km2), many lakes (110,000 of them, many deep glacial lakes) and a population that is sparse and widely scattered. There are hills and prairies, swamps and rivers, and flora and fauna of all sorts.

Fortunately for cryptozoologists, there is also a significant history of reports, thanks to a diverse aboriginal population. Ancient reports of serpentine creatures in the lakes, especially Lake Winnipeg, tell of a shriek let out by the monster that modern inhabitants liken to a train whistle. The hairy man we call Sasquatch is also quite prevalent. Natives report Last winter, I spoke with Archie Motkaluk who sighted Sasquatch in 1969 in Renwer, north of Winnipeg. It was a rare daylight sighting and left a permanent impression on Archie, who was but a young man at the time. Manitoba even has prevalent reports of Wendigo, a native entity similar to a werewolf or vampire. 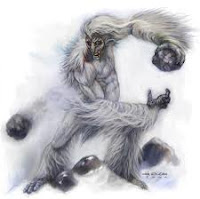 In the late 1800’s a significant group of Icelanders immigrated to Manitoba. Although many continued to migrate south due to harsh winters, some remained, and their offspring are still in the area. With the Icelanders came stories of fairies, elves and trolls. They are thought to live under rocks and mushrooms, and reports come in from workers in lumber camps.

In the air, Manitoba is part of the Thunderbird migration pattern. In addition to the classic southwest are, these ancient birds traverse at roughly the boundary between the US and Canada, from the Pacific Northwest through the Great Lakes region. Many pictographs of Thunderbirds are present in Manitoba., although few modern reports exist.

One of the challenges in cryptozoology is separating the UFO reports from the Cryptozoology reports. A classic example is a report from St Laurent, MB (a largely Metis community). Two young men were badly frightened by a three foot creature with a protruding jaw full of teeth. The same night, a second sighting by an adult male came in from a nearby area. Although there were reports of red and green flashing lights, it is significant to also note that local chickens and cats have been disappearing in large numbers.

Unfortunately, Manitobans tend to be rather tight lipped about their monsters. I strongly encourage anyone with a sighting to email me at robin@triedit.net