Like the Loch Ness Monster, BC  has it's own freaky fish; or monster; or hoax.

Documented sightings to back at least to 1873.  The first recorded sighting (by a Caucasian) was by , B.C. pioneer and author, Mrs. Susan Allison.  Her ranch was located near what is now known as Quail's Gate Winery in West Kelowna, BC.  She described seeing a snake-like creature.  Native persons have reported something similar they call,  N’ha-a-itk, the "water demon".

One of the more recent reports came in to ogopogoquest.com.  The date of the sighting is June, 2017.  It took place on Lake Okanagan.


My wife, son & I were on the boat around 1:30 in the afternoon heading back to the Penticton marina (South). My son was driving as I was watching for stuff in the water. As we were heading South I told him to watch out for the Sea Doo ahead as he was jumping around and making big waves. My son asked what side should we pass him on. I told him to wait until we got closer as he may change directions. When we started to get closer 300ft away we all noticed there was no jet ski there but this object that had three perfect symmetrical waves coming off of it. My wife said slow down as she thought it was a kayaker. We slowed down and approached the area and told my wife and son to grab their phones and start taking a video. Now this is the weird part not one of us had our phones. That never happens. So anyways the object that was making the waves disappears, but the waves were huge, bigger than the wake my 25ft boat was making. They were these perfect three waves rolling away to the West, not the east. There were no boats in the area either and a super com day. So we are not sure what we saw but the size had to huge as we thought it was a jet ski jumping around. The picture is so vivid in our minds.


Literally hundreds of reports have come in since 1873.  Most report a strange wave, or something sticking up out of an otherwise calm lake.  Some scientists believe that the creature must be a form of primitive whale  Basilosaurus cetoides was a prehistoric whale that lived about 35 million years ago. during the Cenozoic era.  Basilosaurus matches almost exactly with the log-like descriptions and as being one to two feet in diameter with a length 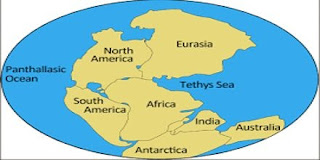 of 10 to 20 meters (30 to 60 feet).   One glaring problem with this theory is that the first fossils were discovered along the Gulf Coast of the United States , along with a few fossils in the eastern U.S.  Fossils were later found of a second species, B. isis, in 1904 in North Africa.  They were thought to have inhabited Tethys Ocean (located between the ancient continents of Gondwana and Laurasia), before the opening of the Indian and Atlantic oceans during the Cretaceous Period. The Black, Caspian, and Aral seas are thought to be its crustal remains.  None of these are anywhere near Kelowna, BC.


Ogopogo's head has been described as being horse or goat-like. It is reported to be able to move with astounding speed or in calm weather apparently feeding on either fish or aquatic weeds. Some reported seeing fins or feet on the creature. 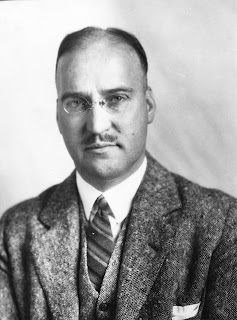 
His mother was an earwig;
His father was a whale;
A little bit of head and hardly any tail-
And Ogopogo was his name.

The name Ogopogo stuck and the original Native name was replaced by this anglicized version.


Possibly the most recent sighting dates to September 2019.  A woman identified only as "Susan C." reported that she was kayaking on Okanagan Lake towards James Grant Island.  No boats were around and the lake was very smooth.  She and her friend both report seeing a long wave and felt a bump under her kayak.  Their husbands reportedly saw the event from the lake shore.  Her husband described it as,  "a funny wave moving down the lake almost something large just below the surface."  The witnesses provided this photo to ogopogoquest.com: 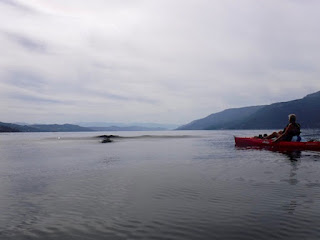 Global News, a Canadian national news source, shared this report about a sighting from June 1, 2019.


Naturally, more sightings occur in the summer months since far more people are on the lake during the season.  UBC-Okanagan  sociology professor Chris Schneider does not "believe in" Ogopogo and says emotion overpowers logic.  “By the very virtue of them not understanding it, it makes them want to try to understand it even more,” Schneider said in the Global interview.

Ogopogo has its own statue downtown and even a book collection.  Real or not, this creature is a huge part of the BC landscape.