Not next door to Ontario anyway.

The state of New York has officially stated that Bigfoot does not exist.

“The mythical animal does not exist in nature or otherwise. I understand, however, that some well-organized hoaxes or pranks have occurred, leading some people to believe that such an animal does live. However, the simple truth of the matter is that there is no such animal anywhere in the world. I am sorry to disappoint you. However, no program or action in relation to mythical animals is warranted.

This quote is from the New York State Department of Environmental Conservation agency’s chief wildlife biologist Gordon Batcheller  in response to the request by Peter Wiemer, of upstate Maywood, NY. 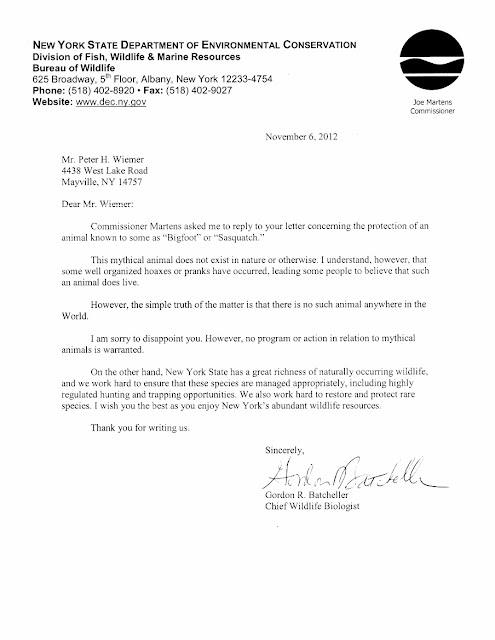 Last July, Peter Weimer, creator of the Chautauqua Lake Bigfoot Expo, officially requested protections for the creature.  His goal was to protect the creature from being hunted and killed.  On October 26th, 2012 wrote a second letter requesting explicit language to protect Bigfoots from being harmed.  He became alarmed when Spike TV offered a $10 million bounty for Sasquatches at the height of big game season.

The New York State DEC official response made by Mark Kandel on the Commissioner’s behalf, stated, “the DEC does not recognize the occurrence of Big Foot in the state, therefore it is not addressed directly in our hunting regulations. Because it is not addressed there is no open season on Big Foot and they may not be taken."

We assume this means Champ is also somewhat protected.  The same goes for other species like Panthers, Mountain Lions and more, which are also not listed. Interestingly, the NY State DEC does describe a race of Bigfoot-like creatures known as "The Hairy Women of Klipnocky" in Klipnocky State Forrest in nearby Allegany County.  The agency’s Hudson River Almanac January 15 - January 24, 2005 also mentions bigfoot in reference to an Aldo Leopold essay when speaking of Croton Point.

The 2nd annual Chautauqua Lake Bigfoot Weekend & Expo is planned for April 26th, 27th & 28th, 2013.  We're still waiting for the RSVPs from the DEC and the big hairy guy himself. 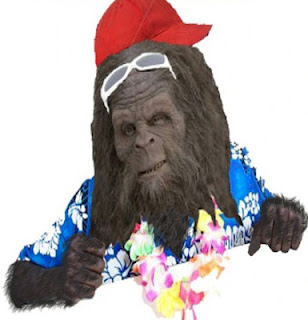