Not Your Typical Canadian Cryptid 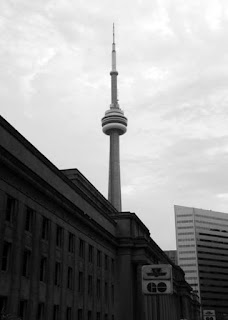 I first wrote about the "Toronto Tunnel Monster" in 1999. At that time the case was two decades old, and I can say that in the ensuing years we are no closer to answering what exactly was witnessed that fateful summer day in Toronto in 1978.

Back in 1999 I was mostly interested in UFOlogy and in particular witnesses various descriptions of aliens. In my opinion the weirder the better! Larry Fenwick a founder and director of CUFORN, which was a grass roots UFO investigative group that operated here in Canada mostly throughout the 1970s and 80's kindly allowed me access to many of their case reports and collected newspaper accounts. That is how I first encountered the original newspaper article on the "monster" and of course being from my hometown it captured my interest. The following is taken from my original write-up:

Ernest (he would only allow his first name to be used within the newspaper account) was described as a soft-spoken 51 year old at the time of his harrowing experience. He and his wife of 19 years had been raising a litter of kittens. One of the kittens apparently disappeared and Ernest decided to search for it in the vicinity of their Parliament St. apartment. Close by he stumbled upon the opening to a dark “cave” and crawled approx.10ft inwards. This is where he said, “I saw a living nightmare that I'll never forget.”

Armed only with a flashlight Ernest encountered a creature of unknown origin. He described the monster as “long and thin, almost like a monkey, three ft long, large teeth, weighing maybe 30lbs with slate-grey fur.” However it was the eyes that truly stood out, “orange and red, slanted.”

Ernest spoke reluctantly with reporters as to what occurred next. The creature spoke to him. “I'll never forget it,” he said. “It said, ‘Go away, go away,’ in a hissing voice. Then it took off down a long tunnel off to the side. I got out of there as fast as I could. I was shaking with fear.”

Ernest never approached the media with his story. He was afraid that people would think that he was “drunk” or worse “crazy” and felt that no one would ever believe him. “The (Toronto area newspaper) Sun found him after hearing about his experience from a contact who had worked with a relative of Ernest’s, one of the handful of people to whom he had confided his experience. He would agree to talk to a reporter only if his last name was not revealed.”

“I believe Ernie saw exactly what he says he did”, said Barbara (Ernest’s wife). “He was terrified when he came back to the apartment and he doesn't scare easily. Look, he’s been known to have a drink in the past - like most people, and to occasionally tie one on, but he’s not a drunk and he wasn't drinking at all that day.”

The Toronto Sun did question some of Ernest’s relatives and neighbourhood acquaintances. They found that all agreed with and supported Barbara’s evaluation of her husband.

Ernest accompanied by Sun staff returned to the location of his strange sighting in March of 1979. The cave’s entrance was located at the bottom of a narrow passageway between the building where he lived and the one next door. Together they found the corpse of a cat, which was “half-buried in the tunnel.” The sad discovery reminded Ernest of ‘strange noises, like animals in pain,” that he had heard emanating from the tunnel prior to his frightening encounter.

Ernest showed the Sun reporter exactly where he saw the strange being. He stated, “ The last I saw the creature it was heading off into the dark.” The passage seemed to drop down very quickly and go a long way back.

It was speculated that the tunnel in fact led to the sewer system and that the entranceway beside Ernest’s apartment was “an access point used by the creature to the surface.” Safety concerns promoted Toronto’s Sewer Department to thoroughly inspect the tunnel as it was feared that area children may in fact try to enter it.

Ernest’s story was very strange, however sewage employees did not ridicule or scoff at it according to the report made by The Toronto Sun at that time. One worker who was quoted in the paper stated, “People who work on the surface just don't know what it’s like down there. It’s a whole different world. Who would have thought a few years ago that people would live in sewers, and yet that’s what they found in New York a few years back. Another was quoted as saying, “I don't know what he (Ernest) saw down there.” He also stated, “I'll tell you one thing. If we could get in there, I sure as hell wouldn't want to go down alone.”

Over the years I have tried to find the exact tunnel where Ernest encountered the monster, with no luck. The city has changed a fair bit in the last 30+ years so it's not too surprising that the entrance to the tunnel is long gone. I have been unable to located any other potential witnesses, but over the years several parapsychologist, crypto enthusiasts, and one very prominent UFO abductee have contacted me in regards to interest in the story.

I have no idea if the Toronto Tunnel Monster is truly a cryptid ......but it may be ....and it certainly is a Canadian mystery.....and for that alone I do believe it is a story worth retelling.....

Photo Credit: PSICAN (Toronto at Union Station)
Sue St. Clair is a psychical researcher living in Toronto, Ontario Canada. She is a co-founder of Paranormal Studies Investigations and Canada and enjoys reading about and researching stories and reports of fantastical creatures.