Giant Shark Sightings in the Bay of Fundy

There are reports of giant shark sightings from around the world. Some of the largest creatures in the ocean are sharks, the basking shark and the whale shark, are greater than 12 and 15 metres respectively. Many of the witnesses that report seeing a large unidentifiable shark have ultimately been found to have seen one or the other. However some, adamantly state, what they saw is not either one of these giant sharks. Nor do they claim it is a great white shark as the size of the animal, even accounting for over exaggeration, is much larger than the great white shark.

Some say it may be C. megalodon, or most commonly referred to as Megalodon! This giant shark, perhaps reaching lengths of 16 metres or more, had six inch teeth. Megalodon is thought to have gone extinct over 1 million years ago as the climate cooled and their main prey, whales, moved northward where the sharks could not follow. Some even say that the animal may have gone extinct only 10,000 years ago. This is based on the examination of a tooth in 1959 that was found by British explorers aboard the Challenger in 1875. The tooth has since been reexamined and may actually be much older than 10,000 years. Others still believe it is possible that the animal has survived in the depths of the ocean!

In October, 1999, witnesses interviewed by Loren Coleman, described seeing a giant shark in the Bay of Fundy, . Bill Curtsinger wasa retired navy seaman, experienced diver, and photographer. He and his dive companion were diving near the southern tip of , a common dive destination. They heard a big splash (like a whale breaching they said), then another “thrash and splash” noise as described to Coleman.

Curtsinger and his companion commented that the colour and the shape of the tail reminded them of a caudal fin of a thresher shark (Alopias vulpinus). The tail was scythe-like and they estimated the shark to be about 10 metres in length, and had a large appendage that was to be 2-3 metres high. Curtsinger stated he had never seen anything like it in his 30 years on and under the ocean. They also described the tail as thrashing from side to side, like that of a shark, and unlike the up and down motion of a whale’s tail.

Coleman noted in his book that thresher sharks are usually foundfarther out to sea but this is not really true in the Bay of Fundy, as thresher sharks are relatively common within the Bay during the spring to fall, and are often seen breaching. However, this shark does not have a huge dorsal fin (or any other fin) as that described by Curtsinger. 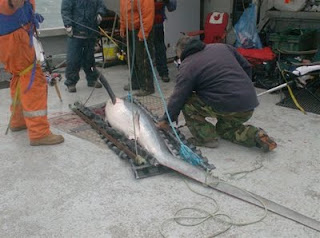 Shown here is a photo of a thresher shark caught in the Bay and you can see the long, thin upper lobe of the tail, and smaller, almost nonexistent, lower lobe. Notice the dorsal fin and other fins are very small. 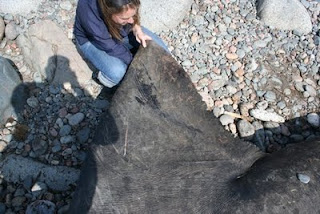 Other shark species do exist in the , but only one has an appendage as large as that described by Curtsinger and his companion, the basking shark (Cetorhinus maximus).

You can see the size of the dorsal fin here in this attached image. The fins are not as thin as described but are definitely long, including the lunate tail which is often exposed when the animal is swimming at the surface. Basking sharks are common in this area during the late spring and into late fall and do breach. There has even been a sighting of a whale shark (1997) within the also, but not that close to shore and they have very clear, distinctive markings.

The question remains, what did they see? Most sightings of a giant shark turn out to be a known species but some still remain a mystery. More details are needed to either confirm or to eliminate them as possible sources of the sighting.