Sasquatch –from the Bottom up part 2; Hot Legs

So far, all we have as “evidence” for the legs of the Sasquatch are witness testimony and some grainy images.  This makes learning about the anatomy of the legs of the beast a challenge-and doesn’t leave any theories a leg to stand on. 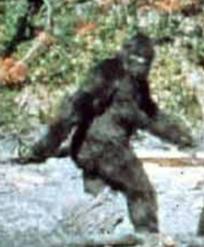 From images and descriptions, it would appear that like humans, the Sasquatch legs are approximately half of the total height.  Because the creature is said to run, we know it must possess at least knees and hips.  This should mean that the basic musculature of a sasquatch leg is much like that of a human.  The knees should bend only one way, and the pelvis supports forward and backward extension.  We do not have any evidence that the Sasquatch can extend its leg sideways from the body, but the lack of such evidence does not mean it cannot make that movement.

Because Sasquatch is apparently bipedal, we will limit the term “legs” to be his lower appendages only.  These would terminate in the feet, addressed earlier.  Like feet, legs assist in weight bearing and locomotion.  In some animals, they also assist in subduing prey.  This does not appear to be the case in Sasquatch, although no evidence either way is currently present.  It would appear that the Sasquatch leg would have at least one femur and one tibia, or bones that are similar to those in humans.   For our purposes we will include the thigh, knee, and ankle as part of the leg, although typically in human anatomy discussion the “leg” is only the area between the knee and the ankle.

In Sasquatch depiction, the leg is in full alignment, meaning that from the hip to the ankle, the leg forms a relatively straight line.  Additionally, the legs appear to be more muscular than the arms.  This is a distinct difference from gorillas, as their forelegs (arms) are very much stronger than their legs.  This is largely due to weight distribution.  Bipedal animals (humans) need to have the bulk of their weight distributed over only two appendages, where the apes put weight on all four.  These traits suggest that Sasquatch is primarily a ground dweller.  If he spent a large amount of time in trees his legs would show a bit of a bow, to allow for better attachment to the tree limb allowing fuller balance.  This should not be misinterpreted to mean that the Sasquatch cannot climb.  Certainly human anatomy allows for climbing and it should be assumed that Sasquatch would be capable of that as well.  Some videos do depict presumed Sasquatch in trees.
Sasquatch appears to move with what is called a “compliant gait”, meaning the knees and elbows are bent as it walks.  Unlike humans, bigfoot has little “up and down” motion in his gait, and raises his heel significantly in his stride.  His stride is considered “in line” meaning that one foot is nearly directly behind the other.  Die hard believers consider the stride evidenced in the Patterson-Gimlin film as conclusive, but a Stanford study showed that humans can in fact mimic the gait shown in the film.
Several bigfoot clips show the animal dropping to all four appendages when startled.  Like an ape, it uses its feet instead of a knee like a human would.  In films where the subject appears to jump, it is an inline stride jump rather than a broad jump. 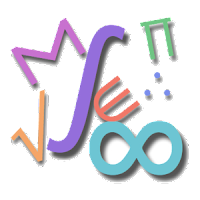 The mathematical formula for average stride length in a human male is .415 times his height in inches. To reverse diagnose that, we can take a sasquatch stride (usually about 600 mm or 23 inches) and divide by .415.  This would make the creature in the Patterson-Gimlin film only 55 inches tall. (note that a “stride” is defined by the distance from the heel of one foot to the second occurrence of that same heel—or two full steps).  Some analysts of the film put him at 78 inches.  In the first example, this would put our Sasquatch in the relative size of Australopithecus, long thought to be either an ancestor of big foot  or the actual species.  In the second example it would put the beast in the realm of  Paranthropus, another candidate for the lineage.  In both cases, the heights are well below legendary reports of 7 and 8 foot beasts. 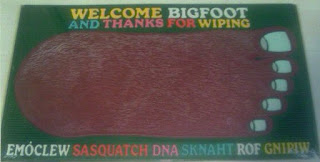 There may be real answers coming.  Craig Woolheater reported in 2006 that Tom Biscardi has access to a bigfoot corpse, buried on a reserve in Manitoba.  But then, on Biscardi’s website you can go “shopping for Bigfoot” and for only $35 can get a “Bigfoot Welcome Mat”.  There is also the “Erikson Project”, the work of Adrian Erikson.  Erikson waffles on whether or not he has access to actual Sasquatch remains, but says he has seen one, and “they walk like runway models”.  For now, anecdotal evidence is all we have toward solving this mystery. 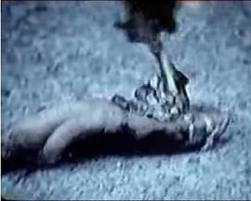