Sasquatch –from the Bottom up part 1; Big Feet


I’m still pretty green at this Crypto stuff—I’ve only been part time studying for about 6 years.  My “real job” is researching hauntings phenomena and Cryptozoology is sort of a side.  I’ve decided to share my learning journey here on this blog, beginning with Sasquatch.

Today we’re looking at Bigfoot’s feet.  Most footprint casts look like this: 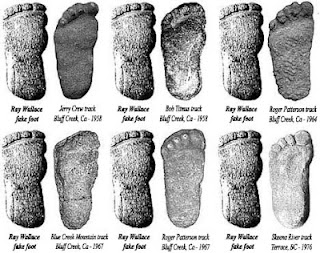 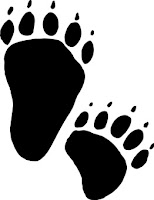 Most notably, each of these images appears to have five toes.  Racoons have five toes, but there would be evidence of claws in the tracks.  Bears also have five toes, but the front tracks have a short sole.  The hind track is a bit larger.  Both are wider near the toe than the above tracks.  Note too that there are no signs of claws on any of these casts.  An animal large enough to leave these prints would step deeply enough to leave signs of any claw attached.
These tracks appear most closely related to human tracks, but is that enough to classify bigfoot as humanoid?  Not just the tracks.  When we add in the probability that whatever made the tracks walks upright, this lends a better probability that this creature is structurally much like a human.

From the footprint casts we can also deduct relative weight and height.  The depth of the imprint is indicative of the weight of the creature who made it.  This is fairly easy to determine in the field.  Choose an investigator with a similar size footprint (or the largest one available) and have that person run barefoot over the same area where the cast was taken (given the same level of wetness of the soil or snow).  Measure that footprint’s depth and add the subject’s known weight into this formula:
Depth of human track/weight of human=depth of unknown/x where x equals the weight of the unknown.
More specifically, if you have a 3 inch depth on your 200 pound human (3/200) and a 4 inch depth on your unknown (4/x) you can solve for the weight as such:  3/200=4/x or 3x=1200, meaning x would be 1200/3 or 400 pounds.  This works much more accurately than analysis of the Patterson-Gimlin tracks where the tracks were compared to horse tracks.  Clearly, the weight distribution is different on a hooved animal with four weight bearing limbs than on a five toed bipedal animal.

Because of the structure of the human foot, it is easy to approximate the height of the person it belongs to.  Keep in mind that this does not allow for deformation like spinal compression or curvature, so the height is not exact.  Deducing this is to get a general idea of how large a creature would be. In humans, the length of a person's foot is approximately 15 percent of his or her height.  The formula is 15/100=foot inches/height inches.  So if a man has a 10 inch foot you can expect him to be about 67 inches tall.  15/100=10/x where x is his height becomes 1000=15x or about 67 inches.  If the cast length is 20 inches, you should expect your creature to be no more than 133 inches or about 11 feet tall. 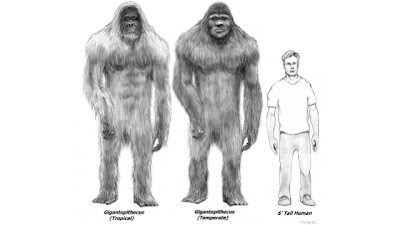 Using the data above, we can assume that from a track that is 20 inches long and 4 inches deep which has 5 toes without claws, our mysterious creature would be 11 feet tall and weigh about 400 pounds.  It is estimated that Gigantopithicus was about 10 feet tall, and weight 1200 pounds.  In comparison, male gorillas generally top out at about 400 pounds and 5 and a half feet tall.  It would seem then that our Sasquatch should be relatively tall and thin. Alternately, if we estimate size based on the creature’s weight  (as estimated above) rather than length of foot and our control is a “fit human male” at 6 feet, 200 pounds, then we would expect our bigfoot to be about 12 feet tall.  In either case, the bulky illustrations we see of purported Sasquatch do not fit.

Witness testimony places much more bulk on our Sasquatch—broader at the shoulders than a man, so different musculature would be present and this would vary the weight considerably.  Factoring in all three—height, weight, and bulk, it would seem appropriate to believe that a male bigfoot would be about 9 or 10 feet tall and weigh in the neighborhood of 800 pounds.

A more accurate estimate of height comes from measuring stride, but we’ll talk more about that when we work our way up to his legs.

Feet have basically two purposes—movement and weight bearing.  The Sasquatch casts show a clear ball and heel, and some casts show an arch.  The larger first toe gives clues to his ability to move.  This larger toe is stronger and we depend on it for propulsion.  In most casts, this first toe is not significantly larger than the rest which would lead us to believe that all toes on this creature assist with propulsion, making movement very fast.  Human feet have three arches, the one we most commonly refer to as “the arch” at midfoot, one along the outer edge, and a “transverse” arch that runs perpendicular to these other two.  All of these arches assist in balance, and generally the “flatter” the arch, the more contact the foot has with the ground.  In the casts above, the arches are barely noticeable.  This should mean that there is a difference in the bone and muscle structure in a Sasquatch foot.  Such flat feet would render a human in great pain and limited mobility and we’re pretty certain that is not the case with Sasquatch.  The Sasquatch is thought to have a mid-tarsal break, which unlike humans would give it enough flexibility to grab objects with its foot.  Additonally, Sasquatch has a gray pad on the sole of the foot called the Ostman pad.

Understanding the Sasquatch foot would be important in placing the creature into comparison with human evolution.  W E H Harcourt-Smith and L C Aiello write:

In the last 80 years or so there have been a number of proposed theories addressing the evolution of hominin bipedalism from the point of view of comparative anatomy. Historically, these theories can be placed into two categories. First, there are those theories based primarily on observed anatomical differences between extant hominoid taxa, and secondly there are those theories based more on fossil material. Because the vast majority of early hominin fossil remains have been found since the 1960s, theories prior to that date rested almost exclusively on the comparative anatomy of modern humans and the extant primates, particularly the great apes. They addressed the question of the probable postcranial morphology and associated locomotor repertoire that immediately preceded the appearance of hominin bipedalism. By contrast, ideas about the evolution of hominin bipedalism since the 1960s have tended to be highly influenced by fossil finds and to focus on questions of bipedal evolution within the human clade.

Sasquatch feet do not fit nicely into any evolutionary delineation.  Perhaps we are dealing with a descendent of the Red Deer Cave People or even an undetermined new hominid species.

Next up-“If you don't have a leg to stand on, you can't put your foot down.” ~Robert Altman