More rapidthan eagles his coursers they came,
And hewhistled, and shouted, and call'd them by name:
"Now,Dasher! Now, Dancer! Now, Prancer, and Vixen!
"On,Comet! On, Cupid! On, Dunder and Blixem!
The poem by Clement C. Moore "A Visit from St.Nicholas" (also known as "The Night Before Christmas" or "T’wasthe Night Before Christmas") is usually credited for the Christmas lore that includes the eight flying reindeer. Whether Santa Claus is real is a matter of a belief system, but thereare reindeer—they’re not mysterious or cryptozoological. Unless they really do fly. If they do that puts them in my world and this week before Christmas I get to work on reindeer!
Reindeer (Rangifer tarandus), are also known as caribou inNorth America. They are deer from theArctic and Subarctic, including both resident and migratory populations. They aren’t rare or endangered but some ofthe subspecies are—in fact one or two may actually be extinct. Reindeer are also plentiful in Europe, whichis where the idea of flying ones was born. 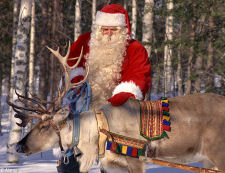 Unlike “regular” deer, both male and female reindeer growantlers. Male antlers are typicallylarger and there are the occasional exceptions to the females having them atall. Wild reindeer are hunted for meat,antlers, hide, milk and, yes, transportation. In Lapland, reindeer pull pulks—sort of a low slide often used by skiers.
In Canada, reindeer share the Boreal Forrest, home to manyother sorts of cryptids.
Reindeer fur comes in many colors—it varies not only fromdeer to deer but also can change on the same deer depending on the season. If mythology is to be believed, the Christmasreindeer were brown and large—large enough to carry a sleigh with a fat fellowand thousands of toys. Because thenorthernmost reindeer are usually fairly small and white, we must assume the NorthPole inported Woodland Caribou from more southern areas. It is an excellent specimen for nighttimewinter travel as it is muscular and has two layers of coat; one of which is adense woolly undercoat. We must alsosurmise that Santa chose the herd from southern Canada, as the Scandinaviandeer are not only less hardy; their antlers fall off in December.

(just as an aside—has anyone ever found a random deer antlerin the forest?)
Reindeer have specialized noses but none are known to glowor even be red as with the 1939 Clause acquisition of Rudolph. Reindeer noses have bones that dramaticallyincrease the surface area within the nostrils and the incoming cold air iswarmed by body heat before entering the lungs, then water is condensed from theexpired air and captured before the deer's breath is exhaled. This is used to moisten dry incoming air andpossibly prevent their tender noses frombecoming red. They can, however, seeultraviolet light and are probably the only mammals that can. With such exceptional visit, it isn’t likelyRudolph’s services were at all needed. Perhaps this is why he was never permitted to play in reindeer games.

Mating occurs from late September to early November, so anyfemales in the Clause herd would probably not be chosen to pull thesleigh. The most dominant males willmate with as many as 20 females and stops eating during this time. He loses much of his body reserve so would likely be too weak to pull the sleigh. More likely adolescent males were used.
Reindeer can run up to 87 km per hour and have an averagebody weight of 86 kg. With this mass andspeed it is possible for a deer to attain liftoff prior to a flight. A deer, however, is not dynamically designedto sustain flight. It has no wings. Relativelyfew vertebrates evolved the necessary features for true flight. Only three biological classifications-pterosaurs, bats and birds - ever evolved the ability for powered flight.

Perhaps what the folks in Scandinavia were seeing pullingSanta’s Sleigh were actually pterosaurs because reindeer cannot fly. 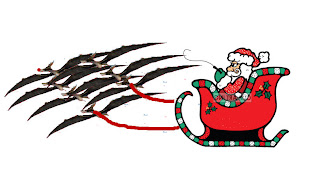 The Canadian 25-cent quarter features a caribou on one face.The caribou is the official provincial animal of Newfoundland and Labrador,Canada, and appears on the coat of arms of Nunavut. Certainly around this time of year, thequarters fly out of my bank account. Maybe that is the connection.
Happy Holidays from CFZ-Canada!
http://en.wikipedia.org/wiki/Reindeer
http://en.wikipedia.org/wiki/Pulk
http://reindeer.salrm.uaf.edu/resources/journal_articles/Growth.pdf
http://www.chacha.com/question/how-fast-can-a-reindeer-run
http://farside.ph.utexas.edu/teaching/301/301.pdf
http://www.abc.net.au/science/features/reindeer/default.htm
http://suzieqq.wordpress.com/2010/12/25/twas-the-night-before-christmas-poem-original-lyrics-text/
Posted by robin at 12:42