Bigfoot From the Bottom Up Part 6: Big Hairy Deal

Reports of the humanoid/hominid we call Sasquatch here in Canada come in from all over the world.  In the US most think of him as Bigfoot, whereas in the Far East he is known as a Yeti.  In fact, there are dozens of names associated with this big hairy best.  Here is a list:

To be fair, some of these names are not necessarily associated with Bigfoot creatures exactly.  There is some discussion among researchers that beings like Lizard Man and Windigo are not at all like him, but rather creatures of their own kind, or even hoax and fictional creatures.

Like the many different names, the big hairy man has been described with many hair colors and varieties.  North America Bigfoot Search has developed a “trait sheet” wherein they identify hair color in bigfoot reports as “black, brown, grey, reddish and more.”  In the Far East, his hair color is generally reported as white or grey, but in North America he is usually noted to be brown, black or blonde—sometimes with some grey interspersed.    In northern Ontario, there are many reports of “Old Yellow Top”, a clearly blonde bigfoot specimen.  It would appear that like humans, these creatures come in all colors.  The same is true for skin color.  Skin is reported as everything from dark to light. 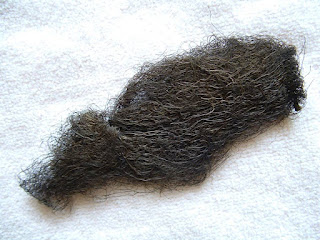 When it comes to scientific evidence, the hair sample field narrows significantly.  In the attached photo, the witness claims the hair was found 7 feet up in a tree in a rural mountainous area, probably in Pennsylvania, given her email address.  Is it from a Bigfoot?  Would DNA testing tell us?  IN 1978, John Greene’s book “Sasquatch, the Apes Among Us” details the investigation of a half dozen light colored hairs found in the 1960’s.  These were sent a laboratory in Los Angeles and it was determined that the hairs showed both animal and human characteristics. Like animal hair, they showed a variation in color and thickness from root to tip.  The scale pattern on the outside of the shaft, however, was more like human hair and there was no core in the shaft.  Animal hair has a core called the medulla in the center of each strand.

In the early 1990’s,  Dr. Grover S. Krantz published “Big Foot-Prints: A Scientific Inquiry into the Reality of Sasquatch.”  He explains that DNA extraction is now possible for the study, but;

Analysis is currently done in comparison to most mammal DNA, especially humans, primates, and bears.  We have been able to correctly identify what Sasquatch is not, but not what it is.  This cannot occur until we have definitive proof of where the sample came from.  In short, we need a bigfoot, dead or alive, to take samples from.  Blood and hair samples were left behind on a Native Reserve in Washington state where the witness reported seeing a Sasquatch bothering cattle.  Fences were torn down and what seemed to be a sleeping nest was built. Professor Stephen I Rosen of the University of Maryland identified the hair as that of a previously unknown primate.  The blood sample was examined by another institution and found to be primate, possibly human, but too degraded to be definitive.   The Summerlin hairs found in the same state in 1995 were found by Ohio State University to be “an unknown primate”. 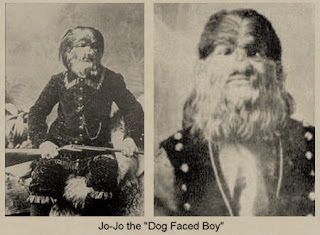 The nature of the Sasquatch body hair may be as simple as Hypertrichosis, or more colorfully, 'werewolf syndrome.'   This is a genetic disorder characterised by excessive body hair on the human torso.   It tends to be relatively rare, but if these beings have a limited gene pool it would be easy to propagate.  If this is the case, then as Bobbie Short remarks in her paper What do we know about Sasquatch hair, really?  “Shave off all that hair and you have a human body looking back at you…”

In early October 2011, "yetiologists" from the USA, Canada, Sweden, Estonia and Russia went to the Kuzbass region of Russia.  There they found footprints believed to belong to a Yeti.  Stuck into at least one of these prints were hair samples.  Professors from Moscow, St. Petersburg and Idaho Universities tested the hairs and found them to be identical to some found in California, the Russian Urals, and near Leningrad.  The samples were then forwarded to the Russian Zoological Institute of the Academy of Sciences to examine and determine the genetic code.

Dr. W. Henner Fahrenbach has the only extensive collection of hairs presumptive for Sasquatch in the USA.  His collection is animal, human, and non-human primate samples accumulated over time.  These samples are from 3 to 15 inches in length, and most are under 90 microns in diameter. Uncontaminated hair samples presumed to be Sasquatch hairs can still be sent to Dr. Fahrenbach to be analyzed at the  Laboratory of Microscopy, 6835 E. Las Animas Trail, Gold Canyon, Arizona  85118.

It would seem that we are a mere hairs bredth away from deciphering the Sasquatch genetic code.